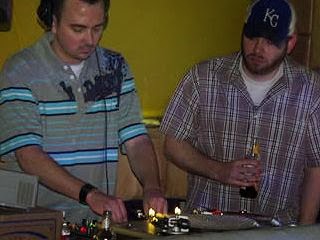 story by Ben Fuller, photo by todd ~ Tactic is the DJ partnership between Ben Fuller and Brent Lippincott aka DJ Candlewax. The two came together creatively in late 2002 while both were living in Lawrence, Kansas. Ben was finishing up his journalism degree at KU and Brent had recently returned to the area after completing his degree in music industry management to run the local hip-hop label Datura Records. The two first met as guests on the immensely popular ‘Breakfast For Beatlovers’ on KJHK 90.7 FM, KU’s student run radio station. It was not until Ben invited Brent play at one of his events in Lawrence that the two realized they had more in common musically than they had previously thought.

Between the two of them, they have explored every aspect of the music industry. Whether it is DJing, event promotion (Ben is responsible for the legendary Good Times 2000 rave in KC among other things) or running a successful independent hip-hop label, (Datura Records is home to two of the areas most successful hip-hop artists, Approach and The Deep Thinkers, who both have released critically acclaimed albums worldwide) Ben and Brent live and breath music to the fullest.

Tactic has never stuck to one genre and never plans to. From the beginning, the ethos was to “play the hot shit” and that meant discarding any boundaries previously held by the two or any DJ for that matter. This philosophy has allowed them to play all over the US, alongside a broad range artists from hip-hop pioneers Prefuse 73 and Beans, to techno legends Cari Lekebusch and Dietrich Schoenemann, IDM producer Cex and even The Faint side project, Broken Spindles.

Tactic ~ on decks ~ august 2005 issue ~ phocas.net by Phocas.Net on Mixcloud

In the words of Tactic:

First, we want to give a big shout out to the Heavy Lounge crew for bringing together like-minded, talented individuals to work together and push some sounds that people in the area may not be familiar with. All the previously released mixes we’ve done were all usually 125 BPM+, whether it was 2-step, broken beats, electro, tech-house or minimal techno. For this mix we decided to slow things down a little and explore some sounds not typically heard at the average electronic music event. This mix starts a little abstract then gets into the meat of it. Everything is game. Hip-hop, IDM, dirty south rap, electro, dancehall, its all in there. We hope you enjoy it. Here is the track list: