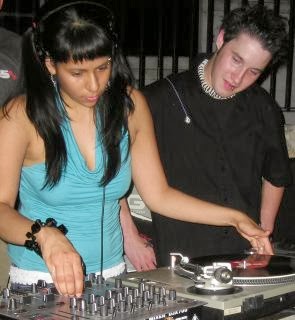 story by Rj Bass , photo by unknown ~ Kansas City, MO - It seems that everywhere you go in Kansas City, two types of music dominate the night life dance scene, top 40, and house. No matter where you go it seems, your always going to hear one or the other if you wish to go out dancing. Over the years some promoters and club owners have tried to change that by adding something new or different.

As is almost always the case in KC, those nights were shut down before they ever really got a chance to get started. When the DeepFix started their night “Frisky” over at Kabal, they made a real attempt to try to fuse a different style of music with the familiar house sounds. They brought in some of the city's best drum & bass DJs to play upstairs.

Although it was a valiant effort to attempt to give the city something a little bit more then what it normally hears, in the end drum & bass was replaced with top 40. Thats why today when any promoter, DJ, or club owner tries to expand the boundaries of what is considered normal dance music in KC, I have to take a listen and see for myself whats going on.

Two such dj's and one little dive bar on Broadway are attempting to do that now, and I must admit they are making a really good go at it. DJ Manders along with friend and DJ partner DJ 4Star have started a new night over at The News Room called Patio Beats. Manders is well known as one of KC's sexist female House DJs and 4Star is one of the fastest rising stars in the drum & bass community in KC. Together they are attempting to do what several have tried to do in the past, which is to bring the familiar dance music sounds in KC together with the lesser heard sounds.

Every Saturday night from 9:00pm till 12:30am you can hear the familiar sounds of house music and the heavy beats of drum & bass blasting out of their sound system all the way up and down Broadway. The hot summer nights combined with the endless flow of traffic and people on Broadway make for one of the more interesting places to start your night, for at Patio Beats you actually feel as if your right in the heart of the city. Manders and 4Star have added to the atmosphere by always bringing in another KC star DJ every week. These guest DJs range in all the different styles of dance music, from House, to DnB to Breaks, to Trance. Manders and 4Star seem determined to show the KC community that their is more out there then just your basic common denominators.

The first time I experienced Patio Beats I was met with the sort of company you would expect to find in Westport. As soon as I exited my vehicle parked across Broadway from The News Room I heard the beats emanating from the small sound system set up on the patio. The moment I entered the bar I noticed that the usuals from the News Room were all gathered around the main bar and pool tables. Cheap PBR and other not as popular brands of beer were flowing from the beer taps and being poured by an extremely friendly bar tender. Being as poor as I am these days, I ordered a pitcher of PBR and preceded to walk up the stars and made my left turn to head out of the doors and onto the patio. Once through the doors I noticed several familiar faces associated with the underground sound in KC along with many faces that I had never seen before.

Some brief conversations with the various patrons left me believing that all were having a good time. The music was great, especially the drum & bass which gave me a much needed break from the usual sounds that all the clubs in KC are constantly playing. Before I knew it, the bartender was out on the patio telling them to shut the music down. Since there are so many residential properties around the News Room, to include a nice size apartment building right across Broadway, they were required to shut the music down before it got to late. No matter though. I finished my beer, said goodbye to the people I knew and had met, and then got in my car and drove off to the next stop of the evening with plenty of time left to enjoy the night.
zine.v1.stories