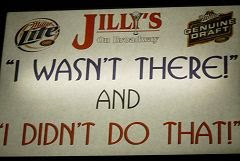 story & photos by Chris Milbourn ~ Kansas City, MO - "It's kind of like Brazilian jazz," DJ Oz verified when I inquired about his bossa nova records, as I sipped a beer while flipping through one of his crates. He finally asked, "Do you recognize any of those albums?" I'd come across some LL Cool J, Diplo and Bill Withers. Other than that, a lot of his stuff was rather alien to me.

"Yea, a few," I answered. Subconsciously I suppose, I went to Jilly's looking for a reason to bring a recently-turned-21 friend along with me the next time I came. At 11:15, there wasn't much encouragement, except for the decently priced drinks and hospitable bartenders. The majority of the crowd looked to be much older than I, but with an age restriction of 21, that was expected. This combined with danceable soul music dating back to the 60's and 70's made me feel a bit out of place, though I've always had a fascination with old funk. Booths topped off with leather seating complimented the left side of the confines awarding the bar, separating the wasted and the lounging. I was stirred from my writing when a girl who I came to know as Erin tapped me on the shoulder and asked, "Do you drive a See-on, or Scion; How do you say it?" "It's Scion, but no, I wish. I got this at the El Torreon a while ago," and I touched the bill of my cap. I'd been getting a lot of random discussions flowing with people following their inquiry about my Scion hat.

The two of us chatted and I sensed the vigor of the music stirring commotion in the crowd around me. Before I knew it, there were eleven young people dancing in an area that couldn't have measured more than 8x15 feet in front of the DJ.

"Where did they come from?" I thought. Kids were popping, locking, up-rocking, spinning and shuffling about, and I felt like the only fool in the place with sandals on my feet as I watched enviously from my table.

Dante Everglade aka "Scoe," aka "your favorite negro" lent me some insight from a musician's standpoint: "This is real music for people on Thursday nights."

He forecasted that in the year 2020, kids will be jamming to 90's hip hop night, just as the party people at Jilly's were completely losing their minds to music that was recorded before most of them were even born. They weren't simply grinding and groping each other as you might expect at your local MainStream Dance Club, but rather took the artform back to it's original spirit, expression. Dante began dancing himself, and confessed, "Scoe's faded!"

Another young man with short, dark hair told me, "I really like what Oz mixes. I'm a gay guy and my buddy's straight, and it's just a cool place we both can come and hang out." I asked the girl I had been talking to throughout the night for a quote about what she liked best about coming to Jilly's. "Can I write it down myself? I have an English degree," she said. "Please do!" 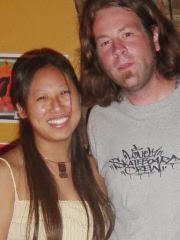 "I love the beat of the music and the energy in Jilly's. This is my favorite place to come on Thursday," she wrote.

The lights went on at 1:15 a.m., but didn't immediately hault the dancing. Oz had told me earlier that he was going to progress into hip hop, but the beats and rhymes never showed up. I guess he didn't want to fix something if it wasn't broke.

In addition, on Monday nights, Jilly's hosts a "DJ swap" in which DJ's and vinyl buffs can trade and bargain for records. DJ Zach Lovely spins current hits on Tuesday nights, and on Wednesday's you can recite (or sit back and listen to) comedy and bear witness to open mic spontaneity. Propaganda is held each Friday and I was lucky enough to catch Paul DeMatteo cutting up oldies over dance tracks. Also, the "Saturday Night Breakdown" commonly hosts live bands in addition to local MC's and DJ's. Barring Sundays, you can walk into Jilly's and find a party every night of the week. Before I took off, I asked Dante Everglade, "Is it like this every Thursday night?"

With a tired expression as if he lived there, but not disappointed, he replied, "Yea."
zine.v1.stories