its all just propaganda

story by Sarah Bates, photos by todd ~ Kansas City, MO - It's Friday night. The work week is over, your paycheck is in hand, just one thing is on your mind. What's going on tonight? You really don't have to search very far for something fun to do on Friday nights. I've found your first stop of the weekend. Propaganda at Jilly's on 19th and Broadway is the place every Friday night.

Propaganda was born when Brent Scholz, Paul De Matteo, and Mike Dileo played at Jilly's in January. The night was such a success, they did a couple more, and since April it's been going on every Friday. Many people (including myself) have wondered why the night was dubbed "Propaganda".

The name itself is a kind of joke to the guys. They were sitting around, trying to think of a name for their new night. "We dont take ourselves too seriously, and we dont take promotion to seriously" says resident DJ Brent Scholz. "We know we're just putting out a bunch."

The promotion they are doing must be working, because Propaganda is the place for House music on Friday Night in Kansas City. Each of the guys plays a different style of House, Paul plays New York, Brent plays Deep, Funky House and Mike plays Progressive. They do tend to switch it up sometimes, depending on the night and their moods. No matter what records they're playing though, they really put themselves into it. "These guys are very genuine." says Amanda Pate, of Jack and Jill. " They aren't there to make money, or promote themselves, they're only there for the music, that's what they're about.

The first of the three I had the pleasure to meet was Brent Scholz. As some of you may know, the Pitch held their Ultra Music Festival DJ Competition at Jilly's last February. Brent won this competition, and as part of this prize got the chance to play as a representative from Kansas City at the Ultra Music Fest in Miami, Florida held every year at the Winter Music Conference. 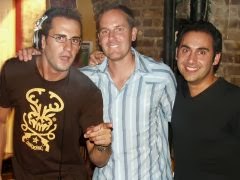 After talking with Brent, I stopped by Jilly's to see for myself what Id been hearing about. My first impression was that everyone seemed very friendly. The atmosphere was very chill. There were a few people that were dressed to impress, but it seemed to be mostly a jeans and tee shirt sort of crowd, which I was happy to see. When i got there around ten thirty, the place was already pretty full, the music was bumping, and many people were out on the dance floor.

After taking in some beats and having a drink, (soda of course!) I stepped outside to chat with Mike Dileo, another one of Propaganda's resident DJs. When I asked what his goal for the night was Mike responded "All of our goals are to not bore anyone. Have something new for people to hear every single week." Mike also discussed how he feels there are many good house DJs in the area who aren't playing out. This night will give those Djs and outlet.

The biggest night of the month is the first Fridays of the month. Because of the art district's First Fridays, many people are out looking for somewhere to go and party (or relax for that matter) afterword. They also have guest DJs many nights. In August, their guests include local talent such as Jack and Jill and Manders. In addition, they tell me that August 29th there will be a super-secret-guest DJ.

The time I spent there listening to these guys do their thing, and talking with them, and the people in attendance confirmed all the rumors Id been hearing. Propaganda is quickly gaining popularity, and I believe it will soon become one of Kansas City's hottest nights. With dope music, good people, great drinks and only a $3 cover charge, what else could you want from your Friday nights? See ya there!
zine.v1.stories