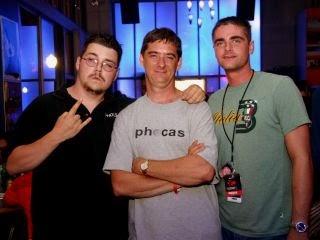 And I thought last month's issue was packed full of stuff! This issue has even more goodies in it. SvS has started a column called "ask a DJ". Kent Frost from Springfield has joined up with phocas again to fill us in on the party scene down there and Shaun just got back from WEMF with the most fabulous of shots. In fact, the cover this month is one of the shots he took while at that event in Canada, and Nate brought us back a little story about those photos as well. The photos are still in a sub-category called "World Electronic Music Festival '05" under the category "recently". We were definitely happy to be one of official media sponsors of that event and are really excited about next year. Every year it just seems to get bigger and better!

Sherri took the shot on this page. Shaun and I had just finished Hot Import Nights and had gone down to see how Joe was doing at u:Move Saturdays w/ Ali Shaheed Muhammed at Kabal Restaurant & Nightclub. It was definitely a crazy night.

Another crazy night recently, was Chaos Theory v3.0: The Catalyst. It was just this past Friday in Kansas City, MO. As with the last two, it was held at the Uptown Theater. We had intended on having a review on it for this month's issue, but we decided to hold it until next month. Be sure to check back for that. The photos are up though. Shaun and I had a great time taking them and it was so good to see all of you again!

We'll be hosting a bit of a new series of events that will be called simply, "phocas presents..." featuring some of the best names around the MidWest, as well as the rest of the country. These are DJs that have somehow captured my attention as "on the rise". On August 20th, we'll host the first in this series and will be bringing Trevor Matthews in from St Louis. Be sure to read the article in this issue about that for more information.

I'll See You on the Dance Floor the 20th!