kc is alive with pride in 05 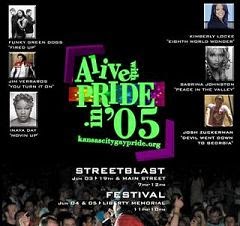 story & photos by Sarah Bates ~ “Alive with Pride in ‘05” was the theme of this years KC Pride Fest, held at the Liberty Memorial on June 3,4, and 5. Friday night there was a “street party” planned, but because of the rain it didn’t officially happen. Despite the storms, there were plenty of people crowding the streets downtown, celebrating the beginning of Pride weekend.

Saturday morning I arrived as they were setting up. I ate some yummy funnel cake and talked with several people about what they were doing at the event and upcoming events in the GLBT community. The first person I spoke with was Tammy Kagarice, who is the Commissioner of the Heart of America Softball League. Kansas City’s team, the Bullets, recently won the Rec Division and in August they will be traveling to San Diego for the Gay World Series. There will be over 200 teams competing, 75 of which are women’s teams. The Bullets currently practice at the city park at 38th and Park Drive in KCK, just close enough to the center of the city for anyone to be able to go check them out and show their support, or just visit them online at HASLKC.com

By early afternoon on Saturday the park was packed. Despite a very small group of protesters, there was a very positive energy in the air. It was hot and muddy, but that didn’t stop everyone from having an awesome time. Every volunteer that I spoke with was very positive about this year’s festival. There was more funding, more volunteers, and more booths than ever before. 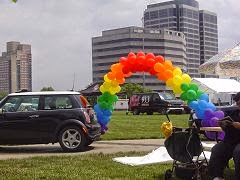 This year’s festival was definitely more politically charged than past years. This is due to the fact that there are many important issues being debated and voted on locally, in Missouri, and nationally. With all the heated debate about gay marriage all over the world, politics were in the forefront of everyone’s minds, and it was reflected through the festivities. There were many political groups represented at the festival. Some groups, like PROMO (Personal Rights of Missourians), were handing out political information, and having Missouri residents sign petitions for the Missouri Anti-Bullying Legislation, and The Missouri Nondiscriminatory Act (MONA). Information on this legislation can be found at PROMOonline.org.

Other political organizations were registering people to vote, and signing other petitions. Other booths were handing out information on various subjects and events that affect the gay community. The Human Rights campaign gave out literature about “Getting Equal”. Mike Henery of Kansas City who sits on the Board of Governors for the HRC told me “We care about our communities, cities, and neighborhoods we live in. We just want to be treated like everyone else”

The Kansas City Health Department was on site giving rapid HIV testing, providing free condoms and educational literature. Other organizations, such as PFLAG-KC (Parents, Families, and Friends of Lesbians and Gays of Kansas City) the Hope Care Center, The Lesbian and Gay Community Center, and the LGBT Student Life Organization from KU were all there representing the interest and needs of the community. 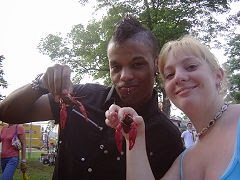 After taking a look at political, social and health concerns, everyone was ready to celebrate. There was a wide variety of entertainment on the stage, along with a variety of drinks and food. Although we were not there for the entire weekends festivities, which lasted from Saturday morning to Sunday evening, I got some of the entertainment highlights from my good friend Ronnie Luna. "The crowd seemed to really like Kimberly Locke and Inaya Day's performances. John Koop AKA Flo and her drag queen counterparts did a tribute to the Wizard of Oz that was really entertaining."

All and all, it seemed the event was a big success. This year was larger, and attended by more people than last year, and everyone seemed hopeful that next year will be even better. One thing that stuck out to me was how many people who were there to show support to their friends and family who were not able to make it there themselves that day. Seeing so many people from different parts of the city and state, different ages, races, religions, and sexual orientations joining together for a cause, and having genuinely good time together really was enough to make even the most pessimistic person hopeful. Hopeful for gay rights, and most importantly acceptance, in the future.

Editor's Note: The Streetblast that was scheduled for Friday, June 3rd was recently rescheduled to Friday, August 5, 2005. Check the calendar for more information!

For more information about PrideFest in Kansas City, be sure to visit them at KansasCityGayPride.org.