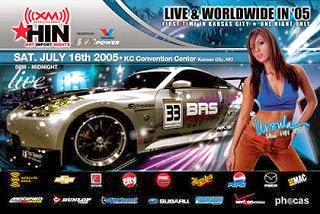 Hot Import Nights - At the Heart of the Car Culture LifeStyle ~ by Cristina Wilson & Brendan Flynn  ~
photos courtesty of hotimportnights.com

There's are those who follow the trends and then there are those who inspire trends. Since 1998, Hot Import Nights has been the place where the pioneers of today’s car culture have gathered to inspire, create, innovate, explore and push the envelope on custom car design.

For nearly a decade HIN has brought you inside, underneath and around the car culture lifestyle. Never before have we witnessed the scene as alive and thriving as it is today. So, for 2005 we’ve upped the ante.

Now, with XM Satellite Radio as our title sponsor, we are breaking all records. Our twenty-two stop global tour kicked off in Los Angeles in March breaking all previous records for attendance, number of cars displayed, variety of live musical acts, number of exhibitors and sponsors as well as number of model and celebrity appearances. With only five shows down including San Mateo, Dallas, Orlando, Boston and Charlotte we’ve already turned away more cars than some shows display their entire season.

XM Satellite Radio Hot Import Nights (HIN) 2005, has proven itself to be the largest lifestyle custom car festival in the nation. The ’05 tour delivers the most diverse collection of vehicles of any car show series – including the best in Mercedes Benz, Lexus, Infiniti, BMW, Audi, Ferrari, Porsche and Lamborghini. And of course, the coolest drift, drag and show cars the sport compact scene has to offer. 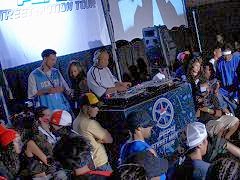 Also this year GameRiot, the world’s largest traveling video game festival and competition, treated event attendees to an intense gaming competition with some of the best professional gamers in the world. Add in live musical performances from Moonshine Record’s DJ MISS LISA, RAVI Drums, local and national dance troupe showcases, b-boy battles, and more than 20 go-go dancers burning up the stage and you’ve got more entertainment than you can handle.

Are You Mac Enough?™ Challenge creates the first ever people’s choice award for favorite vehicle at the lifestyle car shows kicking off on March 5th in Los Angeles

IRVINE, CA - March 2, 2005 – Vision Entertainment announced today that McDonald’s Big Mac® will be launching the Are You Mac Enough?™ Challenge as sponsor of the 2005 Hot Import Nights (HIN) season, which kicks-off March 5 at the Los Angeles Convention Center. This form of real-time voting for show attendees marks the first time that any car show has enabled this level of interactive participation for fans.

Show attendees will be able to vote for their favorite vehicle at every event by text messaging their selection. Winners of each show will be posted on both the HIN website and the global McDonald’s website. At the end of the year, there will be an online vote to crown a national champion. The winners will receive various prizes from both Big Mac® and HIN.

"The Big Mac® Are You Mac Enough?™ Challenge is relevant to the lifestyle of today's youth culture," said Douglas Freeland, McDonald's director of brand entertainment strategy. "Interactivity, choice and technology are central to young adults and, throughout this year, Big Mac® will enable young people to experience their favorite entertainment."

“Hot Import Nights is now the showcase of pimped-out rides, but it's also the future of the car show, a festival of youth, beauty, sound, skills – the extremes of urban culture.”
- Orlando City Beat

“If you've never been to a Hot Import Nights event, it's something akin to Disneyland -- but with cars. Wait... no, that's not right. Maybe HIN it’s more like videogame super-convention E3. We're not sure.”
- IGN.com

“HIN one-ups the hallowed E3 trade show by adding DJ's, loads of free stuff and enough blaring hip hop and trance to get the booties of all of Los Angeles shaking in unison… Hot Import Nights also comes packed to the rafters with some of the sickest cars known to man.”
- IGN.com

”That's right: many people seem to have forgotten that Hot Import Nights is one of the world's premiere car shows. The hottest cars from the best tuners come from all over the world just to be seen at HIN.”
- IGN.com

“Hot Import Nights, and the show’s diversity cuts a wide swath through urban youth culture… Like a great mash-up DJ, Hot Import nights tries to subvert what has become a stale genre and comes up with something wholly new.”
- Los Angeles Times

“I go to a lot of car shows…..but nothing prepared me for Hot Import Nights. “It's like Studio 54 meets a car show.''
- San Jose Mercury News

For more information about Hot Import Nights, visit them on the web at HotImportNights.com