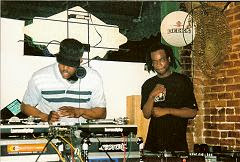 by Chris Milbourn ~ photos by Courtney Milbourn & todd ~ As a student by day for nine months of the year, or as a part time employee granted an off day next Monday, you must be looking for some kind of fun after your parents drag you out to church or you mow the lawn. There's a place downtown on 9th street that's calling your name. Welcome to The Peanut, dubbed "Hip Hop and Hot Wings" on Sunday nights.

The Pitch described this friendly establishment as one of the only places in Kansas City with drink specials on Sunday evenings. This is an all ages congregation with no cover, folks. And to you suburban people, quit believing that just because you live outside city limits you can't enjoy a fresh breath of culture in the company of the scary skyscrapers, and that you must confine yourself to Side Pockets, or Patty O'Quigley's.

I went to The Peanut for the first time on the Sunday before Memorial Day, and was taken aback by the sheer amount of people mingling in this "hole in the wall" bar, as my sister described it. The smell of hot sauce was permeating, and the dishes being carried to various patrons looked delicious. The deal of the day however, was their two dollar bottles, so you know I had to get an import.

The music passing through the airwaves and the age demographic of the occupancy instantly made me feel as though I was in the midst of like-minded individuals. If you're into any kind of local music, and hip hop in particular, you'll no doubt run into many faces you've seen in crowds and on stages elsewhere. 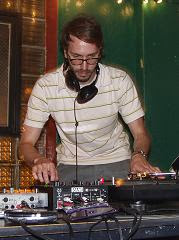 The Cosigners (KC's version of The Roots), Dante Everglade and AJ2 are the resident performers and DJ's on these Sunday nights, but not limited to DJ Attaxic, Clandestine, DJ Flotilla, Dan Matic and rising star Johnny Quest.

I went back seven days later, expecting the crowd to be smaller after Memorial Day weekend, but was pleasantly surprised to find the place was just as I'd left it.

A healthy amount of attractive people on both sides of the gender line always make for quite adventuresome potential, which is notoriously rare in the underground hip hop scene as compared to say, the dance scene. When you finally arrive at the address (418 West 9th Street) you may find yourself idling in your vehicle while fire jugglers put on a show in the middle of the street.

On Sunday, June 12 I treated my sister to The Peanut on her birthday. We decided to each bring a camera, as she's an accomplished photographer and I a journalist. In fact, she provided the photo for this story. We both were a tad nervous about bringing our cameras in and looking like dorks. Little did we know that we were in for a rare treat, one that many other people would capture on film just as we.

I couldn't have brought her on a better night. I'd heard of a guy named Joc Max before, but didn't understand before that night what he had done by producing songs for the likes of Mos Def, Talib Kweli, De La Soul, Pharahoe Monch and Common. And yes, he's straight out of the "City of Fountains."

This guy went about his turntablism in a professional manner, looking to the crowd only a handful of times, while the rest of us sat with our jaws to the floor watching him do things with records that most DJ's could only dream of. Ninety-five percent of the records he played I couldn't identify, or had never even heard before.

Joc held the attention of more than a few hovering around the DJ booth for hours. As someone who's dreamt of DJ'ing since '97, I honestly felt as though I was in school listening to a lecture pour from the speakers.

One half of Kansas City's historic graffiti tag-team (no pun intended) Gear & Scribe, was in attendance, painting on a canvas. Gear and his partner have painted many of those wacked-out walls in Westport and inside the El Torreon, among many other buildings. Gear happily let me look through his scrapbook of art.

The Peanut is a curiously charming spot; many of those in attendance on Sunday nights seem to be friends with each other, and each time I go I find myself chopping it up with someone new. There are a few tables and stools, but actually finding vacant spaces like these to chill at is a task in itself. Patrons outnumber the seating capacity by at least two to one. This problem has been aided by the recent re-opening of an upstairs floor, where the Cosigners typically play, and freestyle sessions erupt on the spot.

I asked my sister in between sips of a neon-green colored margarita "Isn't it great to be sitting in the front row, but then see people through your peripheral vision bobbing their heads along with you?" She just smiled widely and nodded cheerfully. The Peanut reminds us this summer that the weekend isn't over until you hit the snooze button on your alarm Monday.