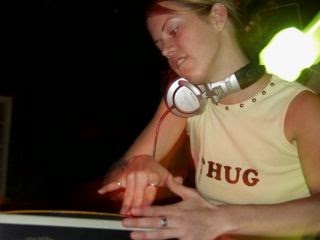 Miss Michaela ~ by Brent Crampton ~ From acres of farmland to miles of skyscrapers - the majority of our readers lay somewhere in between. And with magazines such as XLR8R and URB talking about all the rage in London, Chicago, Miami or Germany – it makes a DJ wonder, “What if I moved to these places?” And what would happen if you moved? Would you make a name for yourself or would you just become another DJ standing in line, waiting for the next crap gig?

This month brings us Miss Michaela - a former KC resident that, like Pat Nice, has followed her aspirations to Chicago. Determined to blaze her own musical path, Michaela’s determination has in turn been a creative outlet that has gained her steady momentum in the birthplace of house music.

Tell me a little about your story - where did you grow up, did you move around at all and where do you live now?

Well, I was born and raised Overland Park, Kansas. After high school I did some moving around between Lawrence, Overland Park and Kansas City, MO. My first move to Chicago was back in 1999. Things didn’t work out so I returned to Kansas City and moved to Chicago permanently in the summer of 2003. I’ve been here almost 2 years.


Where did you live when you first started DJing and what drove you to take DJing and producing to the next step?

When I was fifteen, I started clubbing at Pogo’s – Club Piranha was probably my first real taste of the nightlife. DJ Pablo and Ray Velasquez were the first DJs I really heard. And then I started raving my senior year of high school, mostly in downtown KC at the Graffiti Café. But it was a year or so later that good friend and DJ, Coleco, turned me onto underground house music, and that’s when I really caught the DJ bug. Quickly, I was mesmerized and decided that I wanted to learn. And shortly after that began collecting records - house and disco mostly. I’d been operating under bedroom DJ status, until my first time playing out at “Flight,” which was February of ’99 at Gee Coffee. I was hooked.

So at one point you lived in a smaller metropolitan area with an electronic music scene. What motivated you to move to where you are?

I was very immersed in the KC EDM scene and have worn many hats within it. From attending shows and shakin’ my ass, promoting parties, booking artists, DJing, playing guest spots at various KC venues to holding residencies at The Hurricane, Empire Room and Spark Bar. But it was during the course of my partying days that I fell in love with Chicago. My first Chicago party was “Windy City All Stars,” May of 1998, thrown by the Vibeonauts crew. It was held at Cavellinni’s (this great indoor/outdoor venue on the Southside which has since been demolished). I will never forget dancing to Glenn Underground, who was spinning the sickest deep house sunrise set and never wanting to leave! It was love at first sight and I knew then that I wanted to live here.

So when you moved, what was it like? Did people in the music industry take you seriously since you were from a smaller scene?

After three tries, I finally made it to Chicago. I recommend having a job set up before you move anywhere! My savings went faster than I expected and I had to get the first job that I could find - and I hated it. After six months, I scored the interview that got me the job I have now. I work in the broadcast production department at a reputable advertising agency downtown. I’m lucky to work in a creative atmosphere that allows me to pursue my musical and DJ aspirations.

From a career standpoint - was it hard finding a job to sustain the higher cost of living?

From a DJ standpoint, it’s incredible. Chicago is such a diverse area. It’s great to be able to walk into a record store (or stores, there are tons) and find a selection that offers more than just one genre of music. There’s a wide variety of events, every night of the week and weekend. The local talent pool is stacked, from the up and comers to the old school jocks. And since it’s a big city, almost every artist (underground, indie or mainstream) has a stop here. Besides, for me it’s very refreshing to be living in the “home of house music.” There is so much history to learn and inspiration to feed from.

How is your music career now? Are things the way you envisioned them to be before you moved to Chicago?

As far as bookings go, it’s not all peaches and cream. Since there is a very huge, very talented DJ pool to choose from, you have to hustle to get your name out. Fortunately for me in my short time here, I’ve had the opportunity to play with DJs such as Tony Humphries, Josh Wink, Colette, Lady D, DJ Motion, Alena, Heather, Chris Leibing, Greenskeepers, John Simmons, Sombionix, Paul Anthony, and Sista Stroke among others, at renowned Chicago venues such as Smart Bar, Zentra, Vision, Moonshine, Tini Martini, Lava Lounge, Bar 3 and Holiday Club. Then, last summer, I played a mini tour in Seoul, South Korea. That experience blew my mind, like whoa — they’re flying me half way around the world to play records – Wtf?!

What advice would you give to people who are considering a transplant to pursue music more fully?

I personally love the challenges of being in a big city. Totally sounds cliché, but no pain, no gain. Truer words were never spoken (laughs).
zine.v1.stories