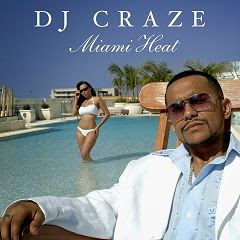 Betty Kang ~ Winning isn't everything, it’s the only thing. Three-time DMC World champion DJ Craze would probably agree. On his latest mix album Miami Heat, genius turntablist Craze serves up 24-tracks of drum & bass and turntablism all sliced together to create an album that is greater than the sum of all its parts. Before DJ Craze starts a busy summer festival schedule, he will also be starting a new residency at long-awaiting nightclub Nocturnal in downtown Miami starting Friday, May 20th. Other confirmed Nocturnal dates include May 27th & June 3rd.

To turntablist obsessives, DJ Craze is a genuine scratch pervert, mixing up styles like a wiki wiki whirlwind, who won his last DMC crown with a set that included Mobb Deep, Common, Electro and Jungle. But you've gotta carry plenty vinyl to be a turntablist - and those bags get heavy. Now Craze is embracing technology and he gets down with Final Scratch so he can have his whole collection at hand and still get down with the wiki wiki.

More than just a technical DJ, Craze is a performer to the 10th power. He can incite the crowd into a frenzy while titillating the scratch fetishists. To see Craze live is to witness a mad-faced battle master at the top of his game. “And body tricks. Oh, the body tricks. Hand over hand, hand under leg, hand behind the back, shoulder blades, spins. Each fluid movement maximizes his compact body and the hand-eye agility of an Iversonian crossover dribble” (DJ TIMES). DJ Craze tours extensively worldwide covering over 40+ countries and headlining festival dates in the UK, Australia, South America and Japan. Lauded for years by hip-hop aficionados, Craze has won the respect of England’s drum 'n' bass cognoscenti and now tours with the drum’n’bass elite Andy C, Bad Company, DJ Hype, Goldie, Grooverider, LTJ Bukem, and Photek.

“With Craze at the wheels, clipped phrases volley like a ping pong ball to form complete thoughts – "I’m getting mine in the one-nine-nine-nine." He sneers as he drops a dope dis that hypes the hungry crowd. His beat juggling, more complex than his phrase juggling, requires more manipulation, more fader clicks. Drum sounds are located and linked together, rearranged, recast. New and old scratches converge smoothly. As genres of music zip and spasm beyond recognition, doubles of old-school funk records tag-team to make a half-time drum-n-bass beat.” – DJ TIMES

It was Craze’s older brother, a Miami party DJ who got him into the scene, and bought him his first set of decks. “I started off mixing Miami bass, then Hip Hop; then I got into Turntablism and then I got into Drum and Bass,” explains Craze. The accolades started in 1998 when Craze was awarded first place in the scratch category at the World ITF Scratch Off Competition. That same year in France he won DMC’s Technics World DJ Championship, a title he successfully defended one year later in New York and went on in 2000 to claim for the 3rd time in London, an unprecedented winning streak. Thus making DMC and turntablist history! He also won the Team Championship for 2000 alongside Allies' crew member A-Trak, regaining the title from the UK's Scratch Perverts. DJ Craze is a feared warrior who has also taken top prize at the Zulu Nation and East Coast Rap Sheet battles. In addition to gracing the covers of URB, Mixer, Knowledge, Rinse, DJ Times and DJ Mag, Craze was also distinguished as TIME magazine’s DJ of the year 2001 in their “America’s Best” issue.

Not only a competitor but also a mentor, Craze was a tutor at the esteemed Red Bull Music Academy (London 2002) designed to inspire a new generation of musicians. Now amidst a whirlwind touring schedule, DJ Craze and established production star Juju have recently formed a new imprint Cartel Recordings to cater to more rugged dancefloor Drum‘n’Bass. New tunes include Cartel Recordings 005, a split 12” with a Juju & DJ Craze collaboration “Holywar” and Craze going in a tune “Take It Ez” with newcomer Genr8 of BC Recordings fame (out April 2005). Also expect to see Infiltrata’s “Soulshine Rmx’s” hitting and the newly finished Cartel monster “Survival.”