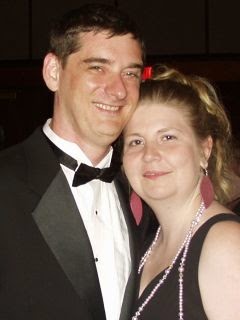 I don't know about you, but I had a bit of fun this month and I'm even more ready for next month. I even managed to dig out of the whole move thing.

This issue is a little delayed mostly because of an eminent hard drive failure which forced me to move all my stuff off of one system on to another. Bah! What a mess. But, I'm back in action and seem to clean up pretty well in this month's photo of Sherri and I, taken at the National Kidney Foundation Gala. I donated a bit of photography for the evening.

The whole thing really was a lot of fun, starting out at The Webster House with a sort of Trivial Pursuit (w/ cocktails and h'orsedeurves) and ended up back at the Hyatt for dinner, an auction and some '80s dance music.

The cover this month is a a shot that Shaun took at Ultra Music Festival 7, while he was in Miami for the Winter Music Conference this year. bPositive wrote this month's accompanying article on her adventures through Miami for that week. I hope they do another DVD for that. Last year's was great, but then... maybe it was because I was there.

It seems that right after that, some really great talent started passing through the area and I hope it keeps up. The month started off with a great little double header at Kabal with DJ P, as well as a CD Release Party for a project that Kansas City's own Ebon and Pete Bones have been working on. Right after that, Cari Lekebusch made an appearance, followed the next day by The Crystal Method. Meanwhile, up in Lawrence, Dara & Terry Mullan were throwin it down.

I even made a trip out to St Louis for Judge Jules. That was a really fantastic event. I hope to see more like that. Velvet was packed, like it had been for Mark Farina, but it was full and the vibe was just right. To quote The Rooster, "This will be a show to remember." I agree. It most definitely was.

Trevor Matthews, who also played at that event, is this month's "on decks" artists. I love it. Those vocals are friggin awesome. Be sure to check it out and have a listen and if you like what you hear, drop by our little night, True Tuesdays at Balanca's. This is the same kinda groove we're stirrin up down there...


See you on the dance floor!