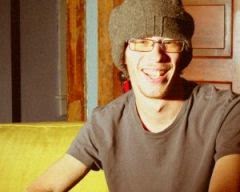 Matthew Bandy ~ by Brent Crampton ~ From acres of farmland to miles of skyscrapers - the majority of our readers lay somewhere in between. And with magazines such as XLR8R and URB talking about all the rage in London, Chicago, Miami or Germany – it makes a DJ wonder, “What if I moved to these places?” And what would happen if you moved? Would you make a name for yourself or would you just become another DJ standing in line, waiting for the next crap gig?

This month we have Denver transplant, Matthew Bandy. Bandy formerly lived in Lexington, Kentucky but made the move in December of 2003. In the early 90’s, Bandy was introduced to house music through the Midwest rave scene. By the time the late 90’s came about, Bandy was throwing his own events under the production guise of AlienSquad. Having brought DJs such as Halo, Kevin Yost, Johnny Fiasco and Charles Feelgood, Bandy simultaneously hosted Kentucky’s only electronic music radio show – “Through The Vibe.”

Having toured almost every major city in America, Bandy went onto create the production duo, Deep House Souldiers with partner Joel Jackson. Their first release came in 2003 on San Francisco label, Lo Rise Recordings. In that same year, Bandy moved to Denver to take his newly formed record label, Limestone Recordings, to the next step. And the next step occurred when the label’s first release was licensed to Ben Watt’s mix CD titled “Buzzin’ Fly Volume One: Replenishing Music For The Modern Soul.”

Bandy is an accomplished musician and DJ who has taken big steps in the music industry while simultaneously taking a big leap geographically. Here is his story . . .

Where did you live when you first started DJing? What drove you to take DJing and producing to the next step (as opposed to just a hobby)?

I first started DJing and getting involved with the dance music scene while living in Lexington, Kentucky. Music has always affected me deeply, emotionally, spiritually and intellectually. So it was a natural for me to share my feelings and ideas through music and push that to the next level.

At one point you lived in a smaller metropolitan area with an electronic music scene. What motivated you to move to where you are now and was it for other reasons than making a name for yourself in music?

I would say that was part of it (establishing a name in the music industry). I also wanted to share what I was doing with a bigger audience and scene, as well as being involved with something bigger that was going on. I hate to think this way, but there was only so far I could push my music in a smaller scene. I definitely outgrew Kentucky and wanted to take what I was doing to a larger level.

Why did you choose Denver as opposed to some other city with a thriving music scene?

I thought of moving to a city that was bigger and had a bigger scene than Denver, but when I visited Denver I really experienced a community here. People were actually excited when I was moving here and welcomed me straight into the scene. I also see a lot of potential in Denver. The city is growing. There is an awesome new art museum being built, we have a huge performing arts complex that was recently completed and they are still building huge buildings. There is a great feeling within all the scenes here. Everyone I meet, whether it be indie rock, art, or the dance scene - everyone has a very positive outlook on the future of the city and what they are doing with it here.

I’ve personally never experienced so many people that have no urge to move anywhere and love what is going on while excited about the future. I was also doing projects with Jon Nedza (a.k.a. Community Recordings) so it was really cool knowing and working with someone already to where I was moving. I kind of look at it like Denver has a lot of potential to do something really good, whether that happens or not isn’t so much the point. Personally I would rather be a part of something that is being created and growing than just moving somewhere to “make it.”

When you moved, what was it like? How did you manage to get gigs and did people in the music industry take you seriously since you were from a smaller scene?

You know, it was a lot easier than I had expected, but I’m not saying it wasn’t hard! Like the other cities I visited, I thought the scene would be cold to me, but it wasn’t like that at all. I was able to find gigs easily and the people here really helped me get them. It was hard leaving the ones you love behind but its also exciting to grow and move on to what the future holds. In all honesty the hardest thing for me to over come were my own personal fears. Having to give up everything you created and built without any security that the move is going to work out. But that is life. When you let go of what your holding on to, your able to learn so much more and life tends to always guide you in the right direction if you’re listening.

From a job standpoint - was it hard finding a place to work that would sustain the higher cost of living?

Things were tuff at first but you adjust. I mean, there are over a half of million people that live in the Denver metro area that are doing it - why cant I? I think you have to think like that. I mean look at the population of NYC. Everyone is making it somehow, why cant you?

How is your music career now? Are things the way you envisioned them to be before you moved to Denver?

I would say things are great right now. I am a lot further than where I was in such a short time. I thought it would have taken longer. All I do is music now, and that’s something I didn’t even do in Kentucky. I work at an amazing record store, produce and DJ. I’m also open to so much more culture, art and people than when living in Kentucky. It’s helped me to put those experiences and learning’s into my art and I have become stronger because of it. I am at a point now where I am making better music, working with quality labels and performing around the country more. I even made it overseas recently.

Do I think that Denver has helped that? Yeah I do, but putting yourself in a position to grow and learn has helped me - it wasn’t Denver. Living in a small city is very comfortable - it’s easy. When you’re forced to walk or be walked over, you do one or the other. I couldn’t have experienced that living in an area where I wasn’t challenged. I couldn’t accomplish anything more. I guess what I am trying to say is - as much as moving to a bigger city helped the experience of that, the move has helped me more.

What advice would you give to people who are considering moving to pursue music more fully?