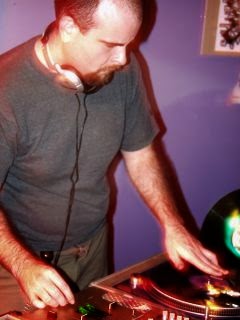 interview & photos by todd ~ I'm not going to spend a lot of time with a lengthy, profound intro with this DJ. I'm just gonna let him speak for himself below. But I will say, that John Stone, aka DJ Eclypz has been there from the beginning and has stuck to his Breakbeat Gunz like none other in Kansas City. If it's a broken beat your looking for, this man has the records from then and now to stir you up and make you do a headspin or three. So, without further adieu..

Why don't you tell us a little about yourself? (where you're from, what you play, how long you've been playin ... and that sort of thing... if you weren't born & raised here... give us a little background.

I was born and raised in the Lenexa/Overland Park/Olathe area, and have lived in the KC area all my life. Nothing really exceptional about location, basically your average suburbanite who hated catholic elementary school and loved public high school. I went on to study graphic design, but all the while thought to myself that I'd rather be making and mixing music. The folks had a lot of influence on that and I'm glad I developed an alternative skill set, but recently I've realized I'd like to get back to what I promised myself I would focus on after that avenue had been explored.

I remember having a passion for music even at my youngest age. My mother played classical guitar and I remember the music striking a chord with me, and I can't believe I just walked into that one. My first song ever purchased was Chariots of Fire's theme song. I loved that song so much, and when most kids were listening to their Disney storybooks on record I was running in circles in my room listening to that track. I then moved onto Michael Jackson, and was a major fan. The kids in the neighborhood and I had our own fan club. Back then everything was on tape. I destroyed that tape by the time I was done with it. Next came my preteen skating years, really getting into rap, early early rap, RunDMC, mc Ran, Public Enemy, BDP/KRS one, anything I could get my hands on. Then I slowly moved onto Punk Rock. I was more so straight-edge but they didn't have a word for it back then. I loved everything from the Subhumans, Circle Jerks, Agent Orange, Fugazi, I could go on forever. Then came industrial music, the transitional music to what I love now. Skinny Puppy, Nitzer Ebb, Early NIN. And then I was old enough to hit up this under 21 joint in the 'burbs called Pogo's. I still remember, the night was called "Club Pirahna". The dj's name was Pablo(Who incidentally worked at the "Edge" in KC before it closed down, and actually works for Roland Music last time I heard).

Initially most of the music I heard was cheesy stuff. 2 Unlimited, The Shamen. I really thought the whole thing was annoying.

And then it happened. Pablo dropped an Underground Resistance track. The thickest electro-techno track I have ever heard in my life. Completely instrumental, acidy and grungy. I ran up immediately and had to find out what that was. From that day forward I became a techno-junkie. I began discovering, through the help of 7th heaven records, all the shit I had been missing for quite some time. I still was baffled though why anyone would waste their money on records.

Until I went to Germany. In 94 I graduated High School and went on a trip to germany with my german class. Two weeks into the trip, after being totally blown away by all the music, all the posters, all the flyers for parties, " Raves", I finally went into the fifth or sixth store and asked one of the clerks, in the best german I could muster up, "Why the turntables? Why all these records and not cds?" She laughed. And then in her best attempt at english told me, "You mix the music together, match the beats". It hit me. It finally made sense. My trip in Germany ended early. I knew from that moment on I wanted to use every last bit of cash I had on getting everything I needed to do it, to become a DJ. It was like I finally found my niche, my voice.

The rest is history. I had the privilege of watching the very first raves pop up in KC and St Louis. I hung out with Ray Velasquez on one end and Sunny D on the other, two opposing forces if you will; Ray being more of a purveyor of great music who happened to blend the tracks together, and Sunny D, the most funkdafied mofo who could cut back and forth and mix two tracks together till they ran out.

And now here I am. I would say breaks is my mainstay, always has been, but a close second would definitely be trance and then drumNbass.

With all of the sub-sub-sub-genres these days, I feel a little inclined to ask if there is any specific type of Breaks that you spin? Or just breaks in general?

Great Question! I have always appreciated the breakdown of the different genres of electronic music, to a point. For instance if I say house music, that can expand to so many different directions that the interpretation is too broad. After all even some of the quickest mentioning of different styles can yield some interesting results, like disco house versus hard house versus deep house.

Breaks is no different although the variations have more to do with different sounds from other genres coming into the breaks arena more so than the breaks sound bringing out it's entirely different sound. Part of that nature lies in the fact that really the only thing that makes breaks what it is; is the break beat itself, the funky beat, rather than the straight "on-beat" sound that comes out of house. Beyond that beat though the canvas is empty, awaiting another style to splash across it. Now in this definition I am making a distinction between drum and bass, hip hop and breaks. So even breaks itself is a sub sub genre. And with that I will just stop there...

The bottom line is, I like to play mid-tempo (115-140 beats per minute) breaks. The different nuances/sub genres only serve to keep my set from getting stale. I will play anything from cheesy energetic tracks to deep and dark trancey tracks to robotic electro tracks, so on. I will play anything so long as it is good. When I say good, I mean to say I prefer a couple of different things out of a track I will play out. One- it has to be intricate in it's pattern development. By that I mean it has to have an element of well constructed thought put behind when and how it builds and breaks down to the different levels of the track. Two- it has to be rich, the sounds and beats should be clear and rich, even if the sound they are going for is grungy. In short it needs to be mastered well. There seem to be a lot of artists these days who have the second part figured out really well, very polished sound. Unfortunately their cookie cutter approach to the actual development of the track can be disheartening. The bottom line is a simple song begins to lose my attention. If I lose my attention the crowd loses their attention.

That is more true than you may realize. More and more DJs are being accused of "playing to the crowd" and I find myself wondering, "Isn't that what they are supposed to do?" Do you have any thoughts on that?

Ultimately in terms of whether or not I think the dj is playing to the crowd or if the crowd is dancing to the dj, I would have to say it's a matter of both. A high-end dj like Derrick Carter for instance, is going to have a lot of people guessing at times because you never know what he's going to pull out. At the same time what has made him famous is his ability to read the crowd and know what they want to hear, and deliver. As an artist I have to demand of myself and of djs I have respect for, an innate desire to push the envelope of what they are doing on stage. With that comes more of a 'crowd dancing to what the dj delivers' sort of vibe. I won't completely ignore a crowd that is not feeling what I am doing, but at the same time I hope the crowd that showed up to see me play came to see someone taking things to another level instead of just being a human jukebox.

I think I would have to agree with that. Let's get back to you though. I know that you play the Cup & Saucer every so often on Wednesdays, but what else have you been up to recently?

Most of my time and energy has been devoted to working on my scratching and turntablist skills. I'd really like to eventually be juggling two break beat tracks, creating a fusion between the club dj and the turntablist. The road is bumpy though and with the clean smooth mixes within most club environments I have hesitated to experiment too much outside of my studio. Along with that I'm also working on some production stuff. I have quite a few odds and ends tracks that I still have to complete, thoughts in progress if you will. But I'm on the verge of finishing what basically amounts to a thirty minute track that incorporates an artificially created thunderstorm with an ambient soundscape built to ride out the whole time. I'm finally getting some momentum with it and can't wait to get a few last touches on it and master it. It will definitely be something unique.

I am definitely looking forward to it.
by phocas