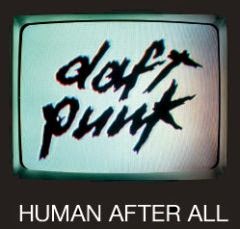 Daft Punk Tells Us Again, How It's Gonna Be ~ by Michael Bradshaw ~ image courtesy of daftpunk.com  ~  Every few years, we in the electronic dance community receive a message upon high. This message, generated in the form of ticks, squeals and thumps, is handed down from the Parisian super-duo Daft Punk. Comprised of two individuals who according to their public persona, are, in fact, more machine than man; Daft Punk has been the torch-barer for dance floor junkies for more than a decade. One can track the audible ebbing from each of their albums through commercial and underground movements ad nauseam. Their latest release, Human After All, is the latest communiqué from these heavenly bodies.

So prepare ye producers: the new way has arrived.

Human After All, with all its ingenuity and ambition, is a pretty typical release for Daft Punk. These legendary producers make tracks for the dance floor, not the radio. Although they’ve experienced some commercial success with hits like, “Around the World” and “Harder Better Faster Stronger,” most outsiders will complain that Daft Punk’s tracks are repetitive. But then again, it seems these songs are meant to be mixed by a DJ rather than be sandwiched between Gwen Stephani and the Yin Yang Twins.

That is not to say the album is unlistenable by other means, however. Daft Punk’s albums make great theme music. Whether you’re jamming in the car to monster tracks like, “Robot Rock” (a track which we in the Midwest would call, shit-kickin’) or chilling in a cafe with “Television Rules the Nation,” at its core, Human After All is a futuristic dichotomy of bangin’-to-ambient space beats.

Tracks like, “The Prime Time of Your Life,” “Emotion,” and “Make Love” are great examples of Daft Punk’s dynamic yet simplistic electronic arrangement. These songs won’t tear any buildings down, but they will move you to deeper understanding of music and what it is capable of. “The Brainwasher” may not be the best after hours track, but it certainly will tear the floor to shreds during prime time.

However, the most striking thing about Human After All is its audio landscape. Daft Punk’s greatest musical attribute is their ability to render sonic environments in new and interesting dimensions. Daft Punk bends sounds in ways the lord never intended. Upon listening to “Robot Rock,” one may very well wonder; on what planet do guitars sound like this? “Steam Machine” may convince you to take acid and drive through an automatic car wash. The title track may just cause you internally combust.

Another thing that is new on Human After All is its stark representation of funk. Daft Punk has always been funky, but on cuts like, “Technologic,” shit just gets nutty. Human After All definitely pushes the boundaries of groove-oriented samples. “Robot Rock,” very well may contain one of the funkiest hooks ever recorded.

Above all, Human is a worthy buy. You can count on a plethora of remixes and mash-ups to surface in a matter of weeks. You most certainly will hear the after effects of this album for generations. However, if you’re looking for another squeaky-clean, radio-friendly, electro album, Human After All won’t satisfy you. However, for those die-hard Daft Punk alums, Human After All is yet another document of Daft Punk’s relationship with the netherworld and we should be happy to have them around to tell humanity just how music should sound in the 21st century.
zine.v1.stories