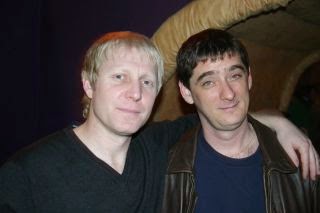 Wow! This month's "on decks" starts off nice enough, but I mean... it's hard not to like Roni Size, eh? Check it out!

This month's cover goes to Joe. It's a shot he took while at Caffeine Music and Arts Festival 2005 in Denver just this past month. From the sounds of things, they definitely had a party goin on out there. A few people guessed at 5000! I really wish I could have gone myself, but I was in the middle of moving, bah! It completely absorbed my life and two weeks later, continues to. I'm still digging out.

I really should start out-sorting photos of me as I go through them. It's a bit hard sometimes to find one. On the other hand, I do get a chance to go back through all the photos from the month again, which is always kind of cool.

The one for this column this month was taken by Shaun at the Derrick Carter event, recently at Kabal Restaurant & Nightclub. It was good to see John again. It seems sometimes that too much time passes.

This month was definitely a hodge-podge of photos. We've got a couple of new folks tryin out for photographer spots on the site. Jason and Sarah both have given us some new perspectives on thes scene. To top it off, Chris just sent me an update from New York and I just got Shaun's photos from Miami.

St Patrick's Day was the day that everyone seemed to building up to here in Kansas City though. By all accounts, the cities efforts to deter drinking at the parade completely and utterly failed. All that they really accomplished was to get people to start drinking earlier. The parade itselt was pretty good, but still lacking in comparison to parades that I have witnessed in other cities.

Besides the parade side trips that you can find in the galleries, under "a little culture", there were also a few trips into the unusual, with Freak-Fest at Davey's Uptown and Seraphim Shock at Balanca's Pyro Room.

Speaking of Balanca's, True Tuesdays have really started to pick up. I think that it's going to turn out to be a fine little night. DJ True is keepin it True and keepin the House a little funky and a little jazzy. Sara Please was our guest last week and some of the other guests that he has lined up are equally as fine. Be sure to come by on Tuesday and chill with us. True Tuesdays is slowly but surely becoming, in the words of the owner of Balanca's, "one of my favorite nights."

That's pretty much it for now though. Spring has sprung and there are some phat parties comin up in Kansas City and all over the Central MidWest. Keep your eyes open and your ears to the ground. You aren't going to want to miss a thing this spring.

See you out on the dance floor!