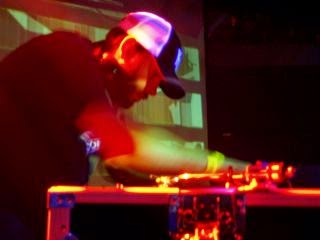 written by the heavy lounge ~ photo by babygirl ~ New to the burgeoning Kansas City dance scene is a group of individuals who not only promote and play, but live the genre of music that has many names.

This collective calls themselves the Heavy Lounge, which is appropriate in that the heavy part is the music itself. This isn't your cookie-cutter, run of the mill dance music or 4/4 beats. This is soul through and through.

The members of this collective, J.A.H., Ben Fuller and Candlewax (together as Tactic), Aural Assassin, Bucho, pictured left and right, RJ Bass, Sydeburnz, and Rob Lee, are in this for the music. There's no one person in charge, there's no hierarchy. It's communal in nature, it's pure, and most of all, it's universal.

"There hasn't been a genre other than downtempo, that I can play that caters to a family eating dinner, people drinking at the bar, AND people dancing simultaneously," says J.A.H. "It's something apart from the standard headliner with a heavy dance set in his crate, which we love."

This music appeals to all people. It's chilled out enough to put anyone in a good mood, jazzy enough to make your grandmother smile, and accessible enough for the general public to enjoy without having already been a fan of electronic music.

"We're just trying to educate people. This is a form of music that expands past boundaries. There's some deep, deep soul involved in a lot of the tracks that we play. The producers of our music aren't in this for the money. These aren't Top 40 hits we're playing. That's why we're out there, playing, trying to educate people and get them open to the idea that House music doesn't have to be all filtered or deep. That drum and bass can be danceable AND soothing at the same time," says Bucho.

Kansas City has seen it's fair share of amazing dj's who play house, dnb, techno, and every other form of dance music. It's time for Kansas City to experience the musical comedown that is the Heavy Lounge.

Aural Assassin, one of the dj's who doesn't get nearly as much of the spotlight as the others, unfortunately, says "We try to demonstrate a love for more than just one genre. Within 10 minutes you could hear a broken beat, jazz and ambient blended into some 4/4 house with a hip hop accapella or spoken word; nothing is sacred! The idea is to expand upon musical theory and knowledge, without being pretentious - and hopefully we accomplish that."

Type in "triphoprisy@hotmail.com" at MySpace.com if you want to join up to find out about new mixes, upcoming gigs, or any other news relating to the Heavy Lounge
zine.v1.stories