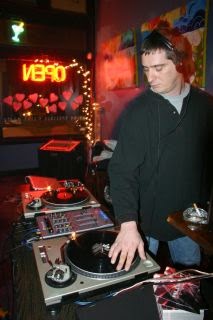 You know... every time I write this column I sit down and listen to the latest download. For the last couple of months, it's been the "on decks" column of this site, now being managed by Brent Crampton. If you have a mix you want people to hear. Get ahold of him. It has got to be a new mix though. We want you to give the massive something new that they don't already... aight?

Weird. All I started off to say was... Nice Funky Start Lunatik! I'm only 5 minutes into it and my leg is bouncing as I sit here and write. Don't miss this one. This is defnitely a good mix.

This month's cover was a bit of a problem. We didn't really have a photo that was related to the main article, so I had to go find something that was kinda loungish. There a bunch that I had picked out, but something about this one did it for me. The shot is actually one that I took at Kabal during the Bunnies & Billionaires party a few weeks ago.

The one on this page was taken by our newest addition, Shaun Williams. If he hasn't photographed you yet, I'm sure he will. I thought I took a lot of pix!

The articles this month are kinda on the slim side. There's a bit of a swirl chaos around my life right now and I haven't had much time to devote to anything but taking photos. Solaris brings us his monthly Techno rundown and Brent got us a really good mix with Lunatik. The main story this month was one contributed by The Heavy Lounge about what they are doing. Check it out.

Despite the lack of articles, though you know you can always check in with the galleries and see the story that we didn't write about, such as VJOnes display at Videodrome, which was a lot of Techno fun with Dietrich Schoeneman from NYC.

Earlier, the very same night, I stopped in at The Donkey Show at the Fahrenheit. A mixture of stand-up comedy, music, burlesque & break dancers, it almost had a Vaudeville feel that I will definitely be checking in to more. We had a lot of fun down there and definitely would like to thank the promoters of that event for inviting us down.

SenseOne brought us another peek into the party life in New York by giving us a set of photos from Ninja vs Robot in New Palz, NY as well as a Philly party called Heart Attack.

I should send congratulations out to Brent Scholz on winning The Pitch Ultra Music Contest at Jilly's on Broadway. I hope you have a great time down in Miami!

In addition, congratulations go out to my friend Emily, for a successful opening night at Davey's Uptown. Her show Sugar Puppy & The Lovely Dumplings, a Burlesque Comedy, went really well. I think everyone had a lot of fun and got some really good laughs.

See you out on the dance floor! Oh yea... speaking of dancing.. if you're not doin anything Tuesday (and I know you're not), phocas.net just started sponsoring a new weekly being done by DJ True. It's called True Tuesdays and will be every Tuesday night starting at 10:30 pm. Check the calendar and have a look at the flyer for more information.


see ya on the dance floor!