by brent crampton ~ photos by jackoline lawrence & misha Superstar DJ Lee has been rocking the dance floor since early ‘95. Over the years he has performed with the likes of Bad Boy Bill, Joey Beltram, DJ Icey, Angel Alanis and countless other world renown DJ's. His five-year stint as the DJ in the band, George Zip, gave him the chance to play alongside such national acts as The Kottonmouth Kings, 2SkinneeJ's and Ziggy Marley.

Considered one of the main players in the introduction to dance music culture in Omaha, Lee has continued to be on top of his game while keeping modest about his experience in music. Lee currently holds a residency at Omaha's premiere electronic music bar, 415, as well as a residency in Sioux Falls, South Dakota at Touchez.

With his long and varied history in Omaha’s scene, I probed at him to get this thoughts on times past and what’s ahead for the future.

Recently you have been focusing quite a bit on producing. What are you working with and what direction in your music are you going? Do you have any musicianship experience (i.e. played an instrument, learned music theory)? Have you tried shopping your tracks to any labels as of yet?

I've been working mostly with sample-based programs. Most of what I make is house, and house is pretty sample heavy, so it works out well for me. As far as the direction of my music, it just kind of goes where I feel it going at the time. I've got almost 30 tracks done to date, with most of them being deep, jazzy and fairly tracky. I do have a few bangers though. Most of my stuff is very percussive with organic melodies.

I have been playing the guitar for almost 15 years. I think the that background has helped me quite a bit in both DJing and producing.

As far as shopping my tracks, I have not. I do, however, give my stuff to the locals to play out and play a lot of them myself as well. I am finally getting to the point where I think some of my tracks are good enough to get pressed, so I will probably start soon.

Since you have been booking DJs at Omaha's foremost electronic music bar, 415, what has been your experience there? Being a resident DJ, do you enjoy playing for the crowds?

The 415 has its good days and its not so good days. I love it there though. Dmitri (the owner) supports the music and supports the scene. It's a nice environment to be heard in. Through the four years I have been there, I have seen quite a change. The crowds seem to be there more for the music now, when four years ago they were there because it was trendy to be there. Being able to book the DJs gives me a chance to let Omaha hear the DJs they need to hear. I'm glad 415 has given Omaha DJs a place to express themselves.

What keeps you motivated to DJ? I mean, you're a married guy, going to school, working full time and have been playing out for nine years. In that time you have witnessed a peak in rave culture (which you were very much a part of) and then the spill-over-splash of the club culture. The after taste that we refer to as club culture (given the context of electronic music in Omaha) can sometimes seem a bit sour and past its expiration date. The industry around here doesn't seem promising that the music will get big again – and doesn't show any signs of going away. Why keep doing what you do?

The music keeps me motivated. I love the music, and not just house, but all kinds of EDM. I think there is a place for every style. I can spend hours on a track, or hours in the DJ booth and time seems to just fly by. I think that enjoying something, no matter what your surroundings are, is key in keeping yourself motivated, whatever it is you are doing. I think if we keep playing, they will keep coming to hear us.

The peak was great, who doesn't like parties with thousands of people at them? I loved it at the time, but everything has to evolve. The shift to clubs legitimized the music. I think EDM is much more acceptable in the public eye than it was during the time of the mega-raves. The people involved in the scene are getting older, and want to be able to enjoy the music in a more stable environment. I really don't mind if it gets big again, I'll love it either way. Making the scene smaller makes it more about the music and less about the negative perception society has had about EDM. 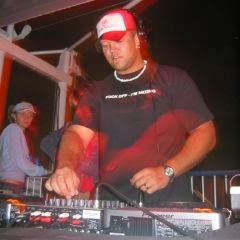 Back when you were regularly DJing with names such as Halo, Bad Boy Bill and Joey Beltram in the hay-day-rave-days, did you ever think you were going to "make it" in the industry? And now that those times are gone, what is your outlook on your participation in music?

I never thought I was going to make it like those guys did (the DJs he opened for). I'm from Omaha. It's not that Omaha doesn't have the talent, there are some fabulous DJs here. DJs like Plan 9 (formerly DJ Kaoss), Glenn Okada, Brent Crampton, Lunatik, and a host of others are just as good technically and have just as good of track selection as some of these thousand dollar DJs. It's the location that is hindering us. No one wants to bring a DJ from Omaha out to London or New York, it just doesn't look good on a flyer.

I'm not doing this to get big or get rich. I wouldn't turn down flying out of town every weekend to play halfway across the country or globe, or having some of the premier DJs playing my tracks, but my life is not going to be over if it doesn't happen, nor am I expecting it to ever happen. I'm going to keep playing out when I can and keep making tracks until absolutely no one wants to hear them. Then I'll just make my cats listen.

Sorry, not trying to seem so depressing about the music scene. It just seems that some old school DJs are riding on a high that is well past its prime. One can't live on memories of the past. What's your hope for the future?

To keep on doing what I do and to keep on making people enjoy what I and others are doing with EDM. I'd like to see Omaha open up a bit to the idea of EDM in more of its clubs. I went out to Denver over Christmas and there were dozens of venues out there where you could hear EDM on the weekends. Omaha has one place to hear underground DJs on a Friday or Saturday night. I think that once people get a little more accustomed to the idea of underground dance music in clubs, and not top 40 and hip-hop every where you go, they will start to appreciate the difference and appreciate the music.

Given the above questions, tell us a little bit about where you have been. I know you used to be in a band?

I was in this rock band, George Zip. I DJed and did some vocals in the band. We wrote hip-hop influenced rock songs about playing kickball and shooting horse on the basketball court. We weren't too serious about ourselves. The other musicians were some of the best in Omaha. The other DJ involved, and mostly stage prop, was the infamous DJ “.com.” Some of our other members have gone on to bands that have been featured in Rolling Stone. We did, however, open for Ziggy Marley, 2skineej's and Kottonmouth Kings. The band was great and really helped me develop into a true musician.

You have been a few other places other than house in your DJ selections in the past. Tell us about your experience with DJing jungle and techno?

I played Drum and Bass for a couple years. I wasn't really into the attitude that most drum and bass DJs had at the time. I guess I kind of grew out of it. I decided to separate myself from it. I do enjoy some good jungle every once and a while. As far as the techno, I still love it too. Nothing is better than an hour of pounding techno, given the right environment. I don't own any Drum and Bass, but still own almost 500 techno records and probably won't ever get rid of them.

When buying music - vinyl or CD? And what elements do you look for?

I look for mostly the feel of the music. I buy exclusively vinyl. If the music makes me feel good, if it is fluid and well produced, and catches my ear right away - I buy it. Most of what I buy is funky disco house and occasionally some breaks. I'm into more of the groovy, deep disco. I think as I've gotten older, I've gotten into the more musical tracks and away from the mindless bangin' house.

Where, outside of Nebraska, have you DJed?