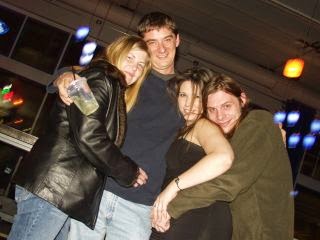 by todd ~ January was a weird month. That's all I can say. There were a few disappointments, but overall, it did yield some rather interesting entertainment. In fact, this month's cover comes from one of those interesting little entertainment excursions. I took that before anyone had really entered the main room at Velvet in St Louis, just this past weekend. We had a really great time, despite a few minor technical difficulties. You can read all about it in the main story for this month.

Before I get any further though, this month's On Decks is friggin awesome! Be sure to check it out! I just finished listening to it before I started writing this and am on my way through it again!

On with the news of the day!

The above photo was taken by JonBoy at RJ's 31st Birthday Bash. You're gettin old RJ, and I think you're hair is nearly as long as Karin's. Get a haircut, hippie! hehe... But Seriously, Happy Birthday!

I did a couple more "off the wall" sort of things this month. Of special note was Neon at Kabal. That was a fun little 80s night. DJ Konsept kept me saying, "I haven't heard that in forver." nearly all night long, while downstairs had more of a 80s House feel to the tracks. Peanut Butter Wolf rocked it Lawrence too. Next time he's in town, check it out. He plays all kinds of wacky stuff on 45s! It was good time.

We got some footage in Springfield this month, thanks to our new photographer, Shaun aka radesix. He was down for the XLR8 party, Work Your Body that was running the same night as When Worlds Collide.

That party (WWC) turned out pretty good, despite the fact that Trevor Lamont & Hipp-e ended up stranded at airports because of crappy weather. Props to Monkey & Chrissy for the Kandy table & lovely stars all around.

Overall, there seems to be an anticipation building in the air for February. There was even a new weekly that just kicked off. Jon NuSkool started a night at The News Room, in Kansas City, MO. It's a perfect little chill Monday night, much like the Perk on Wednesday. I don't know what it is, but The News Room just has a nice little groove all on it's own, but add some turntables and a few unpredictable DJs, shaken, not stirred... and you have quite a fun little night. If you haven't checked it out, do it! Tunes start at 11 pm, barring the invasion of a 4-piece hippie band. Well... in all honesty, they really weren't too bad and it gave us a chance to get nice and saucy before we played records that night.... down in Fraggle Rock!


see ya on the dance floor