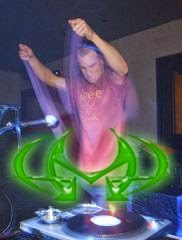 intro by brent crampton ~ photo by steveo ~ Florida-flavored DJ Danny Maze transplanted himself recently to Omaha, Nebraska to spread the sounds of hard house with a dash of Florida breakbeats.

Having DJed for 14 years, Danny Maze cites DJ Monk from Rabbit In The Moon as having taught him the ways of house and breaks in Florida. It wasn't until the mid-90's, while in San Diego, that Maris Moon exposed him to hard house. Maze has been hooked eversince. "I couldn't get enough of the hard bass and non-stop high energy," Maze said. Having DJed on the both the east and west coast, Danny Maze plans to make his presence known in the Midwest. Be on the look out for this high energy act and make sure to check out DJDannyMaze.com for mixsets.
Klubbslang - Klubbheads - DNA Recordings
This track definitely gives you the feeling of the energy and the hard beats coming from the Netherlands.

Put The Needle To The Record - D.S.A - Saviour
Back again in hard house format. Very bouncy with the fun high breaks seems to get everyone moving on the dance floor.

Say Yeah - Dave Austin - Dinky
From the classic "rock the funky beats," Dave Austin adds a punch to this one giving it the high energy lift that gets the crowd yelling.

Annihilating Rhythm - Ultra-sonic - Dinky
Pure massive hard house track that sets itself in its own world. With a deep hard bass and the bouncy energy, this track is definitely a favorite of the night.

Music South East Players - Tripoli - Trax
Another hard house classic with a down tempo feeling. Always a good line to set the night in to place

This Is Acid - Voodoo & Serano - Netrecord
I guess this hard house track is like the "Charge!" song at a sports game.

Something Like This - TNT - Action Records
As the title says, the track packs a punch with a banging hard house beat.

Massive Power - Steve Thomas - Tripola Trax
If I'm looking for a hard house beat with a deep and hard bass line to test out the venue's sound system, then I push it with this one.

OD404 - 9 Bar - Tidy White
Josh Wink started the game of tweaking the highs in the classic track, Highs State, and OD404 has finished the job with a twist giving it a heart-pounding hard house beat.
zine.v1.stories