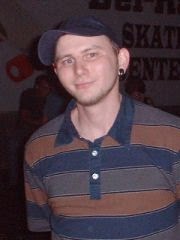 interview & photos by phelyne ~ Sense One is a not-so-native native to the Missouri area. No longer in our area, but still reppin hard for both the east and the west, is my good buddy Sense One. This cat is originally from New Jersey. Through circumstances of life, he ventured here. Since his arrival a few years ago, Sense One has been very involved in the Kansas City, Lawrence, Manhattan, and surrounding scenes. Always bringing the old school mentality to the plate and passing the positive vibes, you would have remembered seeing Sense One on the mic, in the break circle, or next to the speaker. He has recently taken up DJing as well.

Sense One is a true hiphop head. He possesses the 4 basic elements of hip hop, which are BBoying, Graffitti, MCing, and DJing. Now that our good friend and supporter has moved back to the east, now staying in Pennsylvania, I wanted to see how he has been doing.

So for this first question, I'd like to know why you decided to come to the midwest?

It wasn't a decision that I got to make. I joined the Army in January of 2000, my first assignment being Korea. I was told (a.k.a. lied to) that I would be able to choose wherever I wanted to go after that. That never happened. When I opened up my magic envelope mid-way through my tour, it said Ft. Riley, KS. I put my best foot forward and jumped in.

So had you already been introduced to electronic music before you joined the military, or was it something you learned about over seas?

I had always had an interest in music that was off the beaten path. I was one of the only kids in my fifth grade class in a primarily white 'burb in Jersey that listened to Public Enemy. But my first real taste of "electronic" music came in the form of Ministry, Front 242, and Skinny Puppy, in about '91 or so.

So would you say that hiphop was a breakthrough form of music for you?

Hiphop was definitely a breakthrough. It had a way of expressing opinions and feelings that just wasn't being done with most music at the time. When I used to turn on the radio and hear New Kids on the Block talking about how their girl got away, it made me sick. Poison running around in spandex and poodle hair. None of that was real. What was real was when Chuck D or Ice T would talk about how we need to be careful, because if we're not, then we just might not be able to speak our minds as openly anymore. Also, the beats, even as far back as LL's "radio", there was nothing hotter than a hard bass hit. The actual expression and articulation were what sealed the deal though, the intelligence of it all. But yeah, I'd have to say hip-hop and punk rock were probably my two biggest influences.

So how were you actually introduced to Electronic Music?

Real Punk, Dead Kennedys. My punker friends got me into Ministry and stuff, and not long after that I heard "The Orb's Adventure's Beyond Ultraworld" in about 93. That blew me away, and still does, the way that Dr. Patterson created a whole other universe built upon samples and drum loops. It also really opened up my mind. But it truly made me realize the possibilities of Electronica.

So when you were overseas, did you try to experience any of the Hip Hop or Electronic Music? If so, what's your full report, solider? 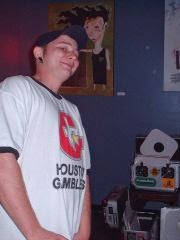 Well, while I was in Korea it took a little while to find the scene there (which didn't even really begin until the very late 90's). After some nosing around for about two months, I found an area of Seoul called Houngdae, which is about a three-block radius of clubs and bars. There was My-yung-wol-gwan, which was kind of our "home base", it was run by our friend Rob, a teacher from Vancouver, BC, and one half of Sickboy Productions. He'd let us play there and chill and whatever, but there were about 5 other clubs in the general area: Joker Red, Mata-mata, and 108 pretty much catered to the house-heads, MI and Theater Zero for the trance heads, Noize Bassment and Feedback for hip hop, and our lowly little hole in the ground, 101, for Drum n' Bass. 101 wasn't even really a drum and bass club when we found it. It got used for 2001, A Space Odessey, which was the NYE party for 2000-2001. A guy who later became my friend and DJ, Durante from Seattle, saw it's potential and rounded up the few drum and bass dj's and put a night together...Our other residents were Fujiwara (who has since opened for almost every major D&B act to go through Seoul), Kid B, and 0909...there were others who would drift in and out, but those were our soldiers, like clockwork, every two weeks. D&B was an entirely new concept to the Koreans, who pretty much only knew 4/4 beats, and most of that was that disgustingly sweet stuff you hear on bad anime. We had a relatively decent turnout, considering. We had about 40 regulars, and on a good night we might swell to 70. Unfortunately, the club closed down in the summer of 2001, and so did our night. There's a very strong hip hop scene in Seoul as well. Feedback and NB would have turntablist competitions on a pretty regular basis.

After you came to the midwest, what, in a nutshell has happened musically in your life?

Once I got here, it was kind of like starting from scratch. I gotta give mad respect to SyQuil for at least pointing me in the right direction, and helping me to meet some folks. I continued to write and focus on my lyrics and finding an outlet to use them, which was hard, being at Ft. Riley, but I still made the best of things. Once out of the Army, but still in Manhattan, I was able to put a lot more work in, not only as an emcee, but as a catalyst. I like being that, and being behind the scenes putting in work to see our music grow and gain respect as much as I like hyping up a crowd. I spent a few months doing Ultraviolet at Abe n' Jakes in Lawrence, and from there I met the Tribal Vision crew. We had very similar ideas of where we wanted to take the scene in KS, and I became their voice. I helped to throw a few parties in Manhattan, and at least give those kids there something to look forward to other than a night at the cowboy bar, culminating in what I think was a great success, Bangin' Under the Stars, in June of this last summer.

What are you currently doing with music?

I'm sort of on hiatus, but yet not. I've been spinning a bunch, mostly drum, bass, hip, and hop and should have a CD ready to rock and roll by christmas. I'm also building a studio with a close friend out here that should be done within the next couple of months. We're aiming to have a 2x4 setup along with a pretty decent bank of synths, drum machines, sequencers, and rack effects. And we're going to get crankin' on some next-level Ming&FS/Spooky/Busdriver/Dylan influenced stuff. I'm also going to be phocas east coast correspondent!

So do you plan on coming back to Kansas City anytime soon?

Hopefully in January sometime, if the road doesn't get too bumpy. I've been talking with a few friends in some neighboring cities to the east and west of KC about coming there, and considering that KC is right between them, I'm hoping I can at least make an appearance.
zine.v1.stories