interview by sense one ~ After my move to the east coast recently, I was able to track down two of the innovators behind HardMind productions, a crew that has been dedicated to bringing quality events to the Tri-State area for almost four years now. Both respected DJ's in their own right, HowHard and Integrity have been putting their heart and soul into the scene since well before they started throwing events. On December 4th, they're gearing up for "Flashback, The Time Machine", their biggest event yet, a warehouse party designed to give the new-schoolers a taste of the old, and put a smile on the old-schooler's faces.


How long have you guys been around?

Howard: Brian & I have been in the scenes for quite some time... one of them being the rave scene. We didn't really know each other until we entered the DJ realm. About 4 years ago, I started a crew called Hardmind with my friend Jamie (DJ Mindgame). How HARDMINDgame. Jamie came across Brian sometime in 2001/2002 from some demos, we offered him to play our yearly free July 4th jam: Blending Formz, shortly after, Brian became the 3rd force in the crew. Later we brought in 3 more DJs (Mannchild, Sanz One, DJ Big Ears).

Where are you based out of?

Howard: Long Island, NY.... Brian is from NJ, but we've more or less adopted him since he is in LI almost every day. Brian and I chose to venture outside Hardmind and starting doing events about a year ago under my side project Raw Underground/Raw DJs and his Mind Grind. We've done about 6 parties since...

Howard: and we haven't killed each other ... yet. That's a big factor.

Brian: We get along very well, and have similar goals.

Howard: Not many people can click so easily and move past just one event. We've collaborated with other crews, DJs, etc since Hardmind started, and trust me, we work with maybe 2 TOPS of those people.

I know, it's difficult; it takes a very special kind of chemistry.

Brian: we both focus on the satisfaction of the party goers and the progression of the culture as opposed to the advancement of our individual entities.

How was the Time Machine born?

Brian: That stems back from why I become a DJ. I felt that the scene took a turn for the worst around 2000. I felt production suffered, it lacked heart and creativity. I the felt DJs with heart deserted the nyc metropolitan area scene.

Howard: or ran for their lives!

Things were that bad?

Brian: the soul and vibe of a culture with unlimited potential was replaced with violence and corruption, at least in my eyes and of course (negative)attention from mainstream media. It more or less self destructed around that aforementioned time. In the year 2000.I didn't feel comfortable going out, but I still loved the music, it had touched me unlike anything had before, but the environment where it existed was so unfavorable, that I decided to simply purchase turntables and at the very least keep the memories of years past in my house. 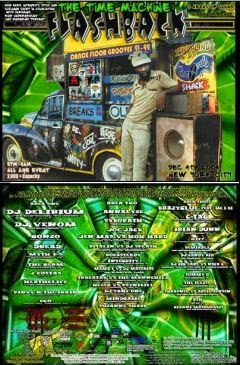 But instead you couldn't keep it there?

Brian: I couldn't. I saw so much potential lost that I vowed to bring back... wait for it.... the integrity back to rave, hence my name. I wanted to bring back the sounds and vibes that drew me in, I wanted others to experience what I did and eventually, as Howard mentioned, his partner heard my demos and they brought me out to their day jam. It all unfolded from there, and The Time Machine is all about reuniting the old school and the new school... the time is right to unite what drew us to the rave scene with the new school who respect the old school. It's a statement that the good guys will win and that with unity, anything is possible.

What do each of you think we're going to have to do, collectively, as a community, to push this scene to the next level?

Brian: Work together, put egos aside. Eliminate the mindset of trying simply capitalize, who view rave simply as a business. We don't view it as a business, however we do work as a structured, professional group.

Howard: My concern is for the locals, regionals, and those bigger DJs we know still have that love in them.

Brian: Yeah, at our very core, we are party kids, ravers if you will.

Howard: 100%, first and foremost, we are on the dance floor with everyone else.

So what are your five favorite tracks right now?? If you had to pick....

What would be the first 5 you pick up and play?

Howard: oooh... give me a minute to think about that so I don't ramble ...

Brian: First and foremost, one of my most favorite labels right now is Passion records. They produce a unique blend of Hard NRG and Hard Trance, but they break the definitions of each genre. All of their releases are dark, aggressive, and driving- raw, dance based rhythms which I always aim to feature. Grady G- Crazee on Passion is one of my fave releases at this point, Titanium Trax 1 by DJ No No with a remix by Karim, the Guy Mcaffer remix of "9mm is a classic" on Tripoli Trax, Mobile Dogwash-How Does it Smell on Dirtbomb Records, and finally "Jupe-The Negotiation" on Flashpoint records. All of these will be on my upcoming CD.

Will it be finished by the party?

Brian: Ideally, but we're so busy, I can't say for sure.

So what about you Howard? What's in your crate?, Deathchant?

Howard: I've more recently moved towards the more industrial/techno influenced end of Hardcore/Gabber, but I'm such a sucker for anthemy or melodic stuff. I love DC, Pys Genocide too... all that stuff is amazing, but more of the slower, grungy stuff.. The Rapist - The Ride (always my first track!!!) ... not soo dirty as it is simplistic and beautiful. Weapon X - Coming Down .... just came out. I just played this track (if I'm thinking of the correct title) last week at Thundertrax.... has an amazing melody. It's off of Enzyme records which are one of my all time favorite labels. Enzyme always comes through for me. The whole Weapon X 12" is good. There's even a weird, almost trance song on it. Project Omega - Protusan Attack ....another Enzymne release. Hardcore Blasters is another label I've been grabbing a lot more in the last year. Has the great melodic synths and anthemy melody line. DJ D's Step on Stage gotta be my top one now. Also, Delta 9's new release on AWW... and his last one on Drop Bass. That's the sick grungy stuff... amazing.

Howard: the more techy/industrial stuff is between 150-165, the melodic stuff Id say is from 160-175. I usually start slow in my sets with the techy stuff or recently with a hard techno track (Working Vinyl, Carnage Records), and work into the anthemy melodic stuff. Then try to hit some older stuff... like old Buzz Fuzz, maybe some Pysc Genocide or DC. I think some aren't really grabbing the slower stuff but I don't shove it in their face.

I'm pretty stoked to hear all you guys, I must say, I haven't been to a "large" NY party in a long time.

Brian: We're very excited about this. We've worked very hard, have chosen our DJs wisely Howard: There's people who use some of the decently sized clubs in the NYC area... but... sometimes that gets old after a while.

Innovation is what keeps it new, I support that as much as you guys.

Brian: This is different though. this isn't linear. this is taking a risk, stepping outside of the box,taking the culture in a different direction from where it stands now. We step away from politics, we don't satiate promoters and friends.

Howard: One of my favorite things is to tag with DJs who spin similar (and sometimes not so similar) styles. It opens a whole new dimension for your sets.

Brian: Because it has the potential to bring the best in each individual dj.

Howard: You work off of each other, the energy, and the challenge of going at it on the spot. Throwing down a hot track and turning to your friend and being like, "Top that!"

It's even more fun when you don't know what's in the others' crate.

Howard: If you are a good DJ, you can take the challenge.

Last question, do you foresee a growth in "traditional" parties?

Howard: I can see things happening in waves.

Brian: Right, we're at the beginning of the new cycle, and there's a lot of potential. Those at the forefront control what direction it goes.

Howard: We have more of a clean canvas now than we've had in the past.

Brian: so there is potential for growth and success if we choose that path and nurture it with the right intentions. We're in a very delicate situation, we have the support of a lot of people at this point. If we treat them well, there's no reason why we can't progress to levels that we've been at in the past. If we take their money and repay them with less than stellar events, we'll lose them and have to start all over again.

Howard: This time avoid the mistakes made in the past as well.

Brian: We know what we would have wanted in that position, as the party kid, so that's what we try to deliver.

Howard: I mean, how many promoters do you dance with on the floor during their party?

Brian: and that's why I feel we are successful.

Howard: We are not disconnected with the people down there. We want what they want.... I would go support a party I feel is worth it. I've paid for almost every party to this day... because I want to support the people who do what we do. The DJs, the promoters.... who ultimately create something for the party kids. In the end, we're here for the love of the music and each other...