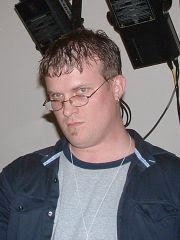 bio courtesy of dave brock ~ photo by kourtney anderson ~ Brock began dj'ing in 1989 on WKNC-fm, where he founded and hosted a mix show while attending North Carolina State University. His early influences are his most profound and come through in his playing to this day. In the early 90's, UK progressive house by way UK artists like Sasha and Digweed combined with Orlando's Dave Cannalte, Chris Fortier and Andy Hughes dominated his sphere of influence. However, as he traveled from party to party across the US, Brock picked up much from the likes of Garth and Jeno of the Wicked crew and the Hardkiss brothers in San Francisco, Danny Tenaglia and DJ Duke in NYC, and Derrick Carter and Terry Mullan in Chicago.

He moved to Chicago in 1995 to swim in a larger pond and expand his musical horizons. From 1999 through 2000, he held a residency at the fabled SmartBar with Robbie Hardkiss and continued to play there regularly until moving to Florida in 2003. In the 8 years he lived in Chicago, Brock played with some of the heavies hitters in electronic music, including John Digweed, Seb Fontaine, Peace Division, Derrick Carter, Scott Hardkiss, Halo and countless others. He also played extensively throughout the US and Mexico during this time and continues his travels today.

Brock's unique programming skills and deft touch on his trademark lengthy mixes make him a standout in an otherwise incredibly crowded field. The deep, spacey, trippy house grooves he seamlessly combines with some of the choicest current and classic progressive house cuts makes his sets unique affairs that have to be heard live to be properly imagined.

Bluefish - Been Too Long
Sleepfreaks continue their top-notch production with another tight, trippy mix.

Felix Da Housecat Watching Cars Go By
Track taken from Sasha’s latest remix/mix project is a stonker, but Armand Van Helden’s filtered madness is the one I reach for.

Powerplant - Let It Go
Mellower offering w/vocals and a tasty bassline make this an inspired effort.

Slacker - Best Boyfriend
Slacker delivers and reminds us why he stays three or four steps ahead of the pack…this one’s got a downtempo mix, a dirty-electro-progressive vocal and a filthy tribal mix by Scumfrog.
zine.v1.stories