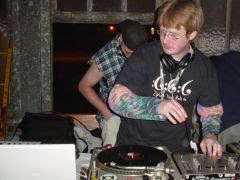 photo by DJ Hardrive ~ After a fantastic performance at the recent phocas event, phlashback, many folks expressed a desire to see these two perform another Chill set together again. phocas figured what the heck. Let's do it again at the third anniversary party as a kind of pre-party cocktail hour. With new, unreleased and original tracks, combined with live Sitar, you don't want to be left out in the cold on this one! Here are just a few of the tracks you might here.

Karma Del La Luna "Travel Without Moving" (Yo Yo)
Organic oranges make love to Sasquatch through space and time, leaving in their wake the sounds of a collective universal orgasm.

Doof "Grantchester Meadows Remembered" (Flying Rhino)
A ray of pure sunlight melting away winter's spell, just long enough for a stomp and a blissed out smile on the dance floor.

DAB "Dream On" (Cafe del Mar)
A deep and rich atmosphere laid out on white sands and lush blue waters. Summer has come early this year with this groover.

U2 "Sleep Tonight <Dimitri's Magical Trumpet remix>" (Unreleased)
An odd transmission from the other side comes through in glorious technicolor sound. Do not operate heavy machinery while listening to this one.

Banco de Gaia "Tongue In Chic" (Six Degrees)
A wonderful dance floor burner filled with a killer bass line and lots of advice on the current state of things in the scene. This is an absolute must have.

Kerry Lannan and AC "The Dragon" (666 Zip Code Town Rekkids)
A deep bird's-eye-view of an epic equation laid out in plain color and cosmic pudding.