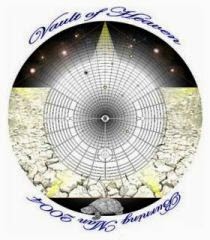 The Burning Man festival is a week-long art and culture celebration that takes place in the desert of Northwestern Nevada. This year, over 20 people from the local area journeyed out there and played together on the dry lake bed (The Playa). Upon their return, these Midwesterners blew off steam at HullabalU, an "afterburn" party, held outside of Lawrence, KS on October 9th. At HullabalU, the burners tried to bring some of the Playa life back home, reconnect, and share memories. This article continues that effort by attempting to portray Burning Man experiences and culture.

Most non-burner events follow the format of a crew or company presenting entertainment to an audience. This arrangement has resulted in great events for years. However, burners experiment with community by taking a different approach. There is no crew or company responsible for booking talent. The insane entertainment at burner events is provided by every person who attends. If you would like to see something specific, you must make it happen. The entire festival is your canvas. It is up to you to decide what to paint. It is real responsibility, but amazing creative freedom! 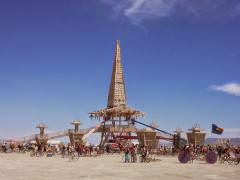 Obviously, there are many things that help a person have a good time but they are too big for one person to handle. Individuals need each other! This is why we have community! At Burning Man everyone has the opportunity to volunteer to help take care of the infrastructure, as greeters, rangers, box office workers, Department of Public Works crew members, Earth Guardians etc. etc. Volunteering is a really good way to make new friends as well!

People band together to create the performances, fantastic art projects, and theme camps, sometimes larger than any one person could accomplish. A person hanging upside down spinning fire would not seem nearly as amazing without all the music, dancers, and jungle scenes. By creating your own awesome experience, you end up ensuring that other people have a good time too. Your creativity is a gift to others and vice versa. When everyone creates magic together, it becomes a giant positive feedback engine, and a gift for everyone.

Commerce can be too impersonal, while gifting is deeply personal and a fundamental feature of Burning Man. Just think of standing in line at Wal-Mart. When I see a gift, I remember the person who gave it to me and all the good times I had with that person. Even if I just briefly met that person, the gift helps them stand out in my mind. And unlike consumer goods, it’s hard for that gift to become trash. A gift is a personal bond, a memory cache.

Vending, commercial sponsorships and advertising, and money are banned. Even bartering is discouraged. Anything that is exchanged is a gift.

The gift economy also enhances the community in broader ways. The most unique form of gifting that I saw at Burning Man 2004 was during a Sol System party. A couple of guys pushed a cart into the middle of the dance floor. The cart had a built in sink, toothpaste dispensers, and hundreds of separately packaged toothbrushes. A tooth brush bar! Perfect for the funk that builds up on one’s teeth after a full night of dancing. Because of these guys, the entire dance floor had nice breath and sweet mouths to kiss!

It is hard to pick out particular moments at Burning Man and describe them, because in the cool, rational light of "the default world" they seem to lose their color. Everything at Burning Man is informed by the massive amounts of personal energy put into the event by every single person. Everything at Burning Man seems bigger than life. My friends seem bigger than life. I do. Strangers do. But I guess one of the cool things is that when you come back from such an event, that "bigger than life" feeling sticks with you and you just really want to spread that feeling around, because it isn't anything arcane. Any group of people can generate that level of energy, just by joining in together, participating, throwing their talents and energies into the group.

There were two images from the night of the burn this year that really made a specific impression on me. With any luck, some of the energy from those moments will trickle through this imperfect channel and will please and delight you.

Saturday night in Black Rock City, 3rd Degree Burn, a local Kansas City fire troupe, performed in the fire procession at their first Burning of the Man. There are about 1000 fire dancers in a huge circle around the man, spinning poi, staff, whips, ropes, fire fingers and breathing fire. Any performance you can do with fire is there. A staggering site, and our friends from 3rd Degree are in the thick of it. I was in the front row watching with Johnny. The fire dancers complete their performance and turn, along with 35,000 participants, to watch the man being engulfed in flame. For a moment, I see the following in perfect silouette against the roaring flames: Agni Tara (the shortest one), Aaron (the tallest one), Scary Carrie (with the crazy hair), Kaalin (in his big leather tophat); along with Boozer, dragooned as a safety guy (wearing big phat hakema pants). Right at that moment, I thought "Happy first Burn, 3rd degree!!!" 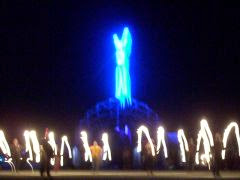 Later that night (the time was unknown because a watch was just not going to be used to pace my wanderings of the city), I encountered a most amazing sight, even by Burning Man standards. I saw, out in the open playa, a big collection of lights. I was sure that there had not been anything out there on previous nights. I had been out past Sol System (the most popular rave area to watch the sunrise) several times earlier in the week. So I cruised over to figure out what was going on.

Lots of structures had been put up in the middle of the open space. There were a couple of flatbed trucks, scaffolding, cages, video screens, control booths. The trucks and some of the scaffolding provided a stage. There was a fork truck, a big propane truck, a forest of palm trees with carpets under them and lit by crazy lights. There was a big drill rig with the boom out over the stage. Drummers were playing on a handful of drum sets, along with some big drums and a huge gong. An electronic music artist was mixing tracks, with gas flares going off in time to the music. There was a guitarist playing into the mix, and he had a flame thrower on his guitar that would go off on the beats. A couple of video artists were mixing wild images up on the screens as lasers were going off overhead. On the stage was a dance troupe of several women doing a dance number. People were getting down all around the stage area.

I hopped up on a structure to see better, and realized two things. First, I realized that the electronic track had a vocal sample in it which was "drop the laundry" and second, the women were doing a really energetic, burlesque kind of number to it. Meanwhile, above the stage, there was a guy swinging from the drill rig, by his ankles, spinning fire! It turns out this creation was a collaboration between The Mutaytor and Xara. These were two theme camps that had set up together during the day on Saturday just for the burn night performance. Wow! That was a bad ass party! 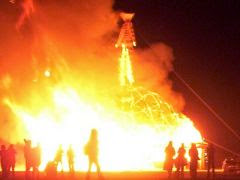 Interwoven through all the fire, the great parties, the monumental art, and the surreal landscape is a unique culture that makes burner events possible. Most importantly, when you go to a burner event, you find that you are completely responsible for making sure you have a good time. This statement is not just about having a good attitude or mouthing nice slogans. Everyone who attends Burning Man events must bring enough food, water, shelter, and whatever other supplies he or she needs to be comfortable at the event. There is no vending. Personal survival is at stake. A person must also pack out all of his or her trash and leave no trace by not littering and polluting the land.

To sum things up, thirty five thousand plus intersecting imaginations run amok for a week, projecting themselves on their environment, and then disappear without a trace. As a result the festival feels like a group dream, a mirage in the desert. One of the local community members puts it best when he said that he has to go back every year just to prove to himself that it happened. In the end, like true art, Burning Man is what you make of it. With that in mind, what kind of mirage do you envision?

To see more photos from Ron & Zay's Fantastic Voyage into The Vault of Heaven: Burning Man 2004, be sure to drop by our gallery. Look under Festivals & Cultural Events!

For more information about the Burning Man Festival, you can visit their web site at BurningMan.com

Or, to hookup with local burners, you can visit MidwestBurners.com, for all the latest on local burner events. 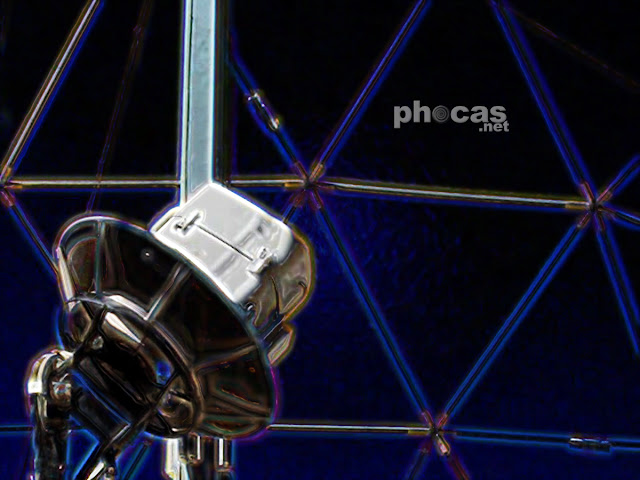