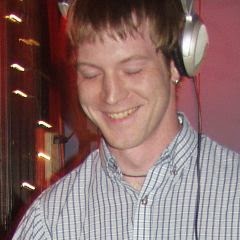 an interview by phelyne ~ photos by todd ~ One of Kansas City's most talented, yet humble djs, Nick Steady was a DJ I had heard of for a few years but never really got to know until recently. Being a huge ragga fan myself, I was thoroughly impressed to hear him throw down a ragga style set when he was booked at the Cup and Saucer for Wednesday's Perk a month or so back. So, I took the liberty to pull him aside, and talk with him for a bit. I wanted to know more about his views on the world of music. Here are some of the great things he had to say.

Nick, when were you introduced into the scene and what peeked your interest about electronic music?

I was first introduced to electronic music back in 94 or so. A friend of mine had some bootlegged videos from parties in England and they were mostly playing breakbeat hardcore, the stuff that was popular right before jungle came into being. I didn't accept it with open arms at first, but it did peak my interest and so I gave it a little time. I think it was the way it sounded. It wasn't about any certain message as far as it not being very lyrically driven; it seemed more important for the music to make you feel an emotion. It lacked ownership like most mainstream forms of music, so it was easier to feel like a part of it yourself. A lot of the sounds were very new, unlike anything I had heard before. I had gotten so bored of rock and the other things I was listening to. This was fresh and unknown. It was all very exciting to me then, and still is today.

What motivated you to learn to dj and how long after you got involved into the electronic music culture did you decide to start djing? 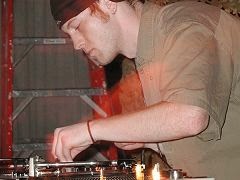 It took a while. For a long time it didn't even occur to me that it was something that I wanted to do. I had always played instruments growing up. I played cello from the time I was eight and played bass guitar in highschool. I had stopped doing both around 99 and it left a huge void in my life. It wasn't until 2001, I think, when I was spending most of my time around a record store that doesn't exsist anymore, and almost every one of my friends were djs. They thought I had good taste in music and wondered why I hadn't taken up djing before. It all kind of started there. None of them played jungle or dnb and that's what I wanted to hear, so I started buying records and practicing all day and night.

What store are you referring to and who were the people that were inspiring you on a local level?

Goodtimes was the record store. The people that really pushed me in the right direction were Rob Lee and Nitro. Rob sat me down in front of the tables and explained how everything worked and left me to my own devices to figure it all out from there. It was a good strategy. It didn't take me long to feel my way through it at all. Nitro really helped me boost my confidence. He wasn't much of a drum n bass fan, but he always had good things to say about my track selection and my growing ability to mix. When I would start to doubt myself, he would always know exactly what to say to make me stop feeling sorry for myself and to get back up on the horse. They were both great mentors.

Who would you consider to be your major musical influences that were not local, whom you might have never had contact with? 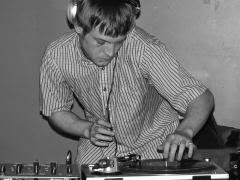 Do you plan to persue music as a career or keep it as a hobby? Where do you see yourself in 10 years from now, musically?

I don't like to make plans. I'm the type of person that can go where ever the wind carries me. If it turns out to be a career then I would accept that with open arms, if not, it won't mean that I'll stop playing. Whatever is meant to be will be. As long as music is in my life in some way shape or form, I'll be happy. The important thing to me as that it remains something that I enjoy. I do plan on getting a little more serious about it in the next few months, but I'm carefull not to get overzealous about it. Ten years from now, hopefully I will have stopped procrastinating and made a few tracks and really have a defined style I can call my own. Really, and I suppose this is true of any dj, I would like to have found my niche by then. I think I'm still testing a lot of the waters at this time, but I'm startin to be able to separate the different styles I enjoy apart from one another. Wow, I didn't think about the fact that I'll be thirty-five in ten years, so let's say that this is what I want in five. Of course, with the way this music is ever-chainging, it's very hard to pinpoint anything as far as predicting the future.
zine.v1.stories