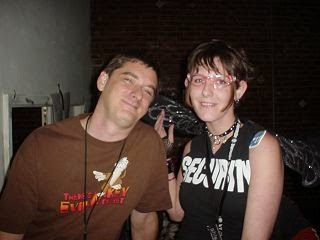 Well, we have survived yet another Halloween and there's tons of photos to prove it. The cover photo this month is from a contribution made to the gallery by Ron Hauser of the Midwest Burners, be sure to check out the related story, Vault of Heaven. I think the photo is just completely hilarious, if you understand the painting this particular piece of art at Burning Man was based on. I had no idea that God wore a Sombrero!

Lest I forget, the photo just to the right here is of me and a friend of mine, Kristin, who was also one of the Security folks at my recent party, phlashback. This photo was taken by the headliner, DJ Hardrive. Thanks for the help Kristin and thanks for a great set Hardrive! And yes, there's an evil monkey in my closet, but he wasn't always that way.

I did want to take a moment here to send out my thanks to each and every single person that made phlashback possible! There is simply no way that we could have pulled it off without you. You will not be forgotten, ever. I also want to thank everyone that came out to see what it was all about, you helped make this party one hell of a success and I won't forget that either. Hopefully, we will be able to do it again sometime really soon. My goal was to have a party for you, to come out, have a good time hanging with old friends and meeting new ones and just have the best possible time. Who said you can't throw a $5 party anymore, eh?

It certainly has been a crazy month. I think we broke our record for photos taken, with just over 2000. That's just crazy, but between myself and Joe and Kourtney, we are doing are very best to keep up with the rest of you!

I checked out a couple of odds and ends this month, with the GladFest Parade 2004, a Midwest Burners gathering in Lawrence, and a Juggalo gathering right here in Kansas City, with plenty of Faygo for everyone!

All Hallo's Eve was definitely the big treat though, for anyone that was out and about this past Saturday. Wow! Who would have thought there ever would have been a party at Union Station? The costumes and the setup were fantastic and I definitely look forward to seeing a third round of Terror at the Train Station. The Official After-Party, held at The Kabal Restaurant & Nightclub was no less than the party itself had been, making for a solid night of revelry, matched only by New Year's Eve.

November looks to be a little more quiet, but you never know. The way things have been poppin off lately, it might just take us all by surprise.

Oh! And keep your calendar open for December 11th! The Kabal Restaurant & Nightclub will be hosting our third anniversary party, entitled phocas 3 (as in cubed). Flyers will be circulating this month! Keep your eyes peeled. You are not going to want to miss this one. We are bringin in some House music from as far away as Jacksonville, FL and New York City and we intend to House Kabal up right.


Until then, you know I'll see you out on the dance floor!