put a lid on it 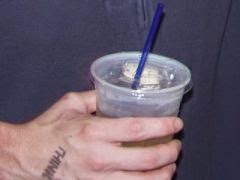 story & photo by todd ~ It was recently that I was having a conversation with a friend at a club, when I was suddenly and quite unexpectedly sloshed with some liquid or another. A quick glance around provided me with all of the information that I needed to determine what had happened. There was a guy standing nearby talking to a friend of his, who he had just bumped in to, causing the sloshing.

There was really nothing that could have been done to prevent it, so I just brushed myself off, accepted his quick apology and went on talking to the person I was talking to.

She fed off of that little incident though and immediately starting telling me about how she had already been sloshed so many times out on the dance floor and was getting a little tired of it. She went on to tell me that people were even being rude when she pointed out their obvious error, telling her things like, "Oh, it will be ok. I'm sure that it will wash right out." and "Oh well, it happens."

That is not the point. The point is nobody wants to get back in to their car to go home smelling like they just crawled out of a bottle of Stoli.

I think that I have been to only one Club night in Kansas City that has actually solved this little dilemma though. That is The Hurricane. Their solution is cheap and effective on several fronts. They put lids on their drinks, or they used to. I'm not sure if they do anymore, but drink lids are cheap. They really don't cost much more than the plastic cup that they are meant to cover.

Their effectiveness can be witnessed on three major fronts. First, you don't have people sloshing drinks all over each other. This in itself is enough to prevent a few of the random fist fights that occur. Second, you don't have people sloshing drinks all over the floor. This saves the janitor a little time after the party. Third, drink lids assist in preventing the spread of "predatory" drugs. Basically, it's much easier to drop something in an open cup than in one that isn't.

So, club owners, if you are using plastic drink cups, why not put a lid on it? You're patrons will thank you and you won't have to stay up so late mopping the floor.
zine.v1.stories