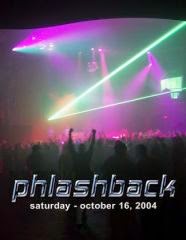 It has been a long time in the works, but it is finally coming together. With numerous complications arising, there was a lot of doubt at first that this event would really even happen at all. Finally, last week, the "all clear" was signaled and we moved forward with previously stalled preparations.

For the main stage of this event, you will be witness to a night of good solid Techno. At times it will be a bit Housey, sometimes in your face, hard and fast. The DJs performing at this event are some of the finest that the Central MidWest has to offer and they are determined to give you what you need.

In stark contrast, if the beat becomes too much, you'll be able to drop by the Chill Lounge and take a moment to collect yourself, regroup and just relax for a minute. This room will also play hose to some of the finest in their genre, as well.

Without further adieu, here's what the lineup looks like on the main stage and the chill out lounge. At some points, it's going to be a hard choice. Hopefully, there will be enough overlap that you will be able to get a glimpse of everyone's talents.

"Dj Hardrive has has been lucky to have met so many great dj’s, producers, and promoters in other areas across the globe that have helped him to pursue all of his goals. He is now working on engineering and producing his own music full time. He has recently been working in the Studio with close friend Alex Calver from Glitch Records in the U.K. on techno music. A few releases are already been pressed on Glitch and Bare Damage Records.

Dj Hardrive is definitely a person who has dedicated his life to the electronic music scene for the past 10 years. He is now focusing most of his time in the studio working on hard techno tracks and he believes his love and passion for the music will grow stronger throughout the years to come."
- excerpt from bio on DJHardrive.com

His recent recent, "Muladhara" is what really compelled me to bring him as the headliner for the Chill Out room. It is definitely one of the best chillout mixes that I have heard and he's going to have some to give away that night for the lucky few that are there early. In his own words, "The Muladhara is the first of the seven Chakras, and is associated with the earth element. A manifestation of four petals, corresponding to the states of the purest joy, natural pleasure, delight in controlling passions, and blissfulness in concentration. All of these qualities correspond to the bliss of realizing the Divine in the physical body. Found at the base of the spine it contains the primal energy associated with the colors red, yellow, and golden. These colors represent the present, the here and now of an individual. "

Solaris is a one-of-a-kind DJ hailing from Kansas City. He plays a style of Techno that is rarely heard in the Central MidWest, but can be found pounding out of the speakers in many of the larger cities around the United States. He plays Hard Techno, has always played Hard Techno and will probably continue to play Techno until the day that falls over dead on top of his turntables. While many DJs flip flop and delve in to other genre's of electronic music, his continued dedication and devotion to this particular genre led me to ask him to "bring it on."

The first time I heard Clandestine play was at the 666 ZipCode Town Records Company Picnic at Gage Park in Topeka. I knew then that soon we would be hearing more from this DJ. Clandestine will be closing out the night. This is not something to be missed. If you don't like Trance, this might just be the DJ that changes your mind about it. Just back from Burning Man in Black Rock City, NV and anxious to show Kansas City what he can do, he is certain to take you on a trip down the truly Psychedelic path.

These two have been the reigning champions of downtempo and chillout tunes for the longest time. Bucho's "Beats... " series are anxiously awaited by many. When he sets his mind to it, you are definitely in for a bit of a journey. At the same time, RJ keeps pushing his own limits by spinning up a fine mixture of downtempo tunes, even going so far as to start a special night in Kansas City specifically for this genre.

What can you say about a person that has done so much, simply for the love of music? Well, there's a lot that can be said about this man, but it's probably better to save space and just say that he has definitely been an active ingredient in the electronic music scene, continuing to always work for the common interest. This evening, you will not be hearing his usual banging style of NRG though. On this particular night, he will be bringing us his own version of DownTempo to the Chillout Lounge. You will definitely want to not miss this very special DJ set.

JAH has been playing here in Kansas City for quite a while. Sometimes HipHop, sometimes Ragga or Dnb, but always faithful to playing "a lil somethin" for ya. Hosting Happy Hour at Kabal for the last several months, he has become quite adept at setting a mood for a lounge. Be sure to drop by and check him out. You will be in for a pleasant surprise, for certain.

Tim is among the finest of the Tech House DJs in the Central MidWest. Blending styles both new and old, labeling himself a bit "eclectic", he is sure bring a bit of smile to your ears and get your feet moving.

In the Goth / Industrial, they do things a little different, but not all that different. It's just like when you go to England. Sometimes, the names change, but it means essentially the same thing. With this introduction, he will bring PowerNoise to the event. Some might just call it Techno, or not. You be the judge. Come out and see what you think. Either way, it is no less driving.

Mix as needed. It's only a $5 donation, so come on out. Don't wait too late though, you might not get in at all.

This event will go from 10 pm until 5 am. Because of the nature of this event, there will be restrictions made at the door to ensure a safe and fun time for all in attendance.

Media Inquires should be sent at least 3 days prior to the event to. No media access will be granted at the event.