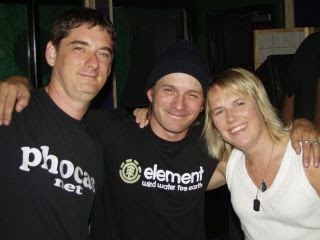 This month's cover is a photo taken by Monkey while working on the CHMA story in Chicago. She had a pretty good time and got to hang out with some old friends and some really good people.

Sherri took the one to the right. There I am again, hanging out with friends & DJ Tony Markham and phocas writer, bPostive at one of the first nights of Origin at Chakra.

There was a lot going on this month, and with the addition of a few more photographers, we got out and about even more.

This month saw the beginning of a string of headliners in the clubs. There was really too much to really talk about here, without going on and on.

I took a side trip out to the Kansas City Renaissance Festival. It was a pretty good time. The day I happened to be there was belly-dance weekend or something like that and I got several good photos of that. I also stopped in to see Brian Slater's gallery showing, just a few weeks ago.

After all the grief The Stray Cat went through, I can say that it was pretty good to be back there again for the second half of Babylon. The crowd didn't seem like it had suffered too much after all the dust had finally settled, after an unexpected trip to Lawrence turned in to an unexpected trip back. They were in good spirits and ready to dance their asses off. From 3 am until I left at 530 am, that's exactly what they were doing! AK1200 was good to hear and he wound them up pretty tight, just in time for Collette to whip 'em into a frenzy.

September was weird, in a good way, and I hope October gets just as weird, or weirder, as I'm sure that it will. Just look at the calendar and see what's going on. There's headliners all over the place!


See You On the Dance Floor!