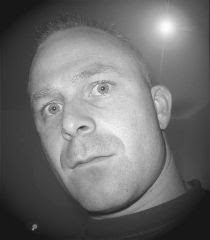 photos & bio courtesy of djhardrive.com ~ Dj Hardrive was inspired by the electronic music scene back in 1991 when he attended his first event in San Francisco. He realized his passion for the music was stronger than anything he has ever felt before. It wasn’t till 1996 that he picked up his first pair of turntables and started learning how to mix. He has now been djing ever since and pursuing all of his goals in the electronic music scene.

By 1999, Dj Hardrive was playing almost every party in the South Florida and spinning at out of state events as well. Spinning with some of the world's best talent like; Paul Oakenfold, Tiesto, Sasha & Digweed, Carl Cox, Josh Wink, Fat Boy Slim, Rabbit in the Moon, Crystal Method, and so many more.

Around the year 2000 Dj Hardrive realized that the music he loved so much (techno, hard dance, and psy trance) was not represented enough in South Florida. He wanted to see the scene expand and grow with people being opened minded to all styles of electronic music. So he decided to start his own production company called “The Hazmat Crew” that consisted of numerous Dj’s playing all styles of electronic music. He was now keeping very busy organizing events all over the South Florida area. Working very hard djing all the time he still managed to organize events that would consist of all styles of electronic music. He was the first promoter in U.S. to throw a party with more Hard Dance dj’s than any other event in the U.S. He was also responsible for bringing over the first international Hard Dance dj’s on the East Coast.

It was not long before Dj’s, production companies, and record labels from the U.K. realized that Dj Hardrive was someone that was trying to help the music grow over in the U.S. He was approached by Andrew Innes from Fevah Productions in 2002 to join the Fevah Family. Fevah productions established their company in other parts of the world like New Zealand, London, Australia and now here in the U.S. When Hardrive got the chance to join this production company he was thrilled more than ever. It had now seemed that all of his hard work was paying off and being noticed.

Now in the present time of the year 2004 Dj Hardrive has taken a break from organizing events only to pursue his music career more. He has been lucky to have met so many great dj’s, producers, and promoters in other areas across the globe that have helped him to pursue all of his goals. He is now working on engineering and producing his own music full time. He has recently been working in the Studio with close friend Alex Calver from Glitch Records in the U.K. on techno music. A few releases are already been pressed on Glitch and Bare Damage Records.

Dj Hardrive is definitly a person who has dedicated his life to the electronic music scene for the past 10 years. He is now focusing most of his time in the studio working on hard techno tracks and he believes his love and passion for the music will grow stronger throughout the years to come.

SALTPETER - BJORN BOMMERSHEIM - THE FX (Awesome vocal sample on this one. Music kicks out for a second from time to time to repeat the vocal to stand out more and then back into business. The placement of the stabs and percussions sounds are arranged real nice to give a nice catchy groove with the track.)

GOATHEAD - SONS OF PIRU - NATIVE DIFFUSION (This is a new record label out of Holland and so far I like what I have heard. This has a nice ride with a nice build of sounds and effects to make the sound get more into it throughout the track. Keep your eyes out for this label in the future.)

BACK STAB COMMUNITY - D-CULTURE & STUFFED - THE RIPBACK (Nice flow on this one, has a lot of backround sound to the effects and echoes put on the twisted vocal to make it stand out very nice.)

INTEC - MARCO BAILEY - NEVER SAY NEVER (This one is one of my favorite tracks, Marco Bailey always seems to bring the tracks he makes more to life with a great break in the track with a funky feel to the bassline and a awesome vocal stab that just hits and sounds perfect.)

SHROOM - SAM TOWNSAND & ALEX CALVER - PERVERT (Real catchy vocal from a fat boy slim song along side a techno beat with some stab sounds from the D&B world. This one will have the dance floor "shakin' their ass!" for sure.)

YING YANG - PEDRO DELGARDO VS JIM FISH - AUDIO (This track is a solid techno groove with some wickid filter effects on the track to make the sound stand out so much more when the beat comes back in. Real nice track!)

T:CLASSIX - RUSH & SNEO - I CONTROL THE BASS (Another favorite track of mine, it has a slice of a vocal you can't make out and a great beat with a killer bassline that makes me move the whole time.)

SUBSONIX - ALEX CALVER & TIM VISION - LAST JAM (This track kicks ass. Awesome vocal sample and a fresh new sound to the techno world. All I have to say is Alex Calver has been putting tracks out lately that are just new and cutting edge for the techno genre and that is a good thing!)
Be sure to check out his web site, DJHardrive.com, for all the latest, including photos, video and mp3 downloads!
zine.v1.stories