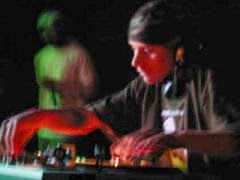 an interview by phelyne ~ photos by N20 / Freeburning / Digital Bombing ~ This month the heavyweight known as General Malice stepped up to the plate to answer a few questions about his career as one of the most up and coming worldwide innovators of the new ragga jungle sound. This cat is originally from Minneapolis and has lived all over the country including Chicago, New York and LA. With several releases out on labels like Big Cat and N20, its hard to miss this up and comer when you look in the ragga section. Being a huge fan of him myself, I wanted to know how he sees the world and his career.

Who and what do you currently represent? Why?

N2O Recordings , Big Cat Recs. , Junglistic Pressure the meanest , rawest , jungle sound around. spent a lot of time paying my dues to represent what i do. We take a lot of pride in our work, and dedicate ourselves to it.

You have been successfully putting out tracks for several years. How old were you when your first record sold out and how has the industry changed since then?

19, when big cat 1 came out. It seems like back then, not as many people had their own labels and not many people were releasing records similar to my style. A lot of people in the game that try to bring you down, but that's always been there. 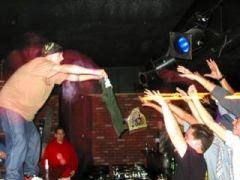 What kind of gear/software do you use to produce and do you make ragga jungle only?

A combination of hardware and software. try to change my set up every now and then, just to add flavor and variety to the production. I've always made a lot of different types of beats, mainly jungle. Dark hardstep tunes, straight dnb, dancehall riddims, hip-hop , most of what i've released has been ragga jungle so far, but recently had N2O releases which have featured harder, darker sounds. and there is a ton coming out soon of all styles.

Has putting out tracks helped your dj career as far as getting more paid bookings?

It's a huge piece of it. If you can release multiple records that are in demand, you 're gonna have the dubs of the new material. I always focused on the djing end of things , and thats where I started.

What do you have to say to encourage heads to stay positively involved in what's going on in the scene around them?

It's vital to stay invovled and to contribute. Too many heads are trying to get such a small piece of fame, through very dis-honorable acts. Pay your dues, dedicate your life to your style and the progress of it. Focus on getting what you do out to people, whether it be your music, art, throwin parties. anything. just get goin.

What labels do you produce for and will you have any new tracks coming out soon?

N2O , and Big Cat Records. Have a ton of new tracks coming out, you're gonna have to check the following sites to get the info: EnterTheDojo / Ragga Records / N2O Records / Digital Bombing / Junglistic Pressure
zine.v1.stories