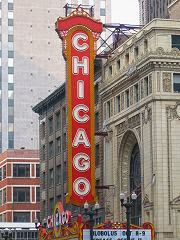 I finally woke up around 8:30a.m., Sunday morning of Labor Day weekend, when I noticed there was a text message on my phone.

After only getting about an hour and a half of sleep I sat by the window of Dino’s 3rd story loft near downtown Chicago and talked with a good friend while having a morning smoke. It was peaceful.

My partners in crime for the weekend, Jefferson and Dino, were still awake from the night before. The event of the day was the Chicago House Music Association’s First Annual DJ Softball Tournament.

I was pretty excited about going because I knew quite a few of the DJs and was prepared to watch them be silly getting their game on. It supposed to start around 11am so I hopped in the shower while Jefferson made some of the coffee I brought up from Kansas City.

When I got out of the shower he was out like a light. I tried waking him a few times to no avail. So I poured myself a cup of coffee, grabbed my homework I had brought, and sat down at the table to let my hair dry while I read my assignment.

10:30a.m. rolls around and I tried to wake Jefferson up again. His eyes open and it looks like the lights are on, but nobody’s home. I stand there and realize that neither of them are going to get up for the game and I am in Chicago with no car.

I made an executive decision to just leave and get to the game myself. I called Offtrack and he told me that the easiest way would be to take a bus, but he wasn’t sure which one I would need to take. I didn’t even have the venue address with me; all I knew was that it was 1200 something Halstead Avenue. I called Max, my old friend from Dusttraxx, who told me exactly how to get there via bus and subway.

I got myself prepared for the day and realized how excited I was to be having a little adventure on my own. I’ve traveled alone before in Los Angeles, surely I can make it in Chicago. Dino’s roommate was on his way to work and said he would show me which bus to take and where to transfer.

We got on the Chicago Ave. bus and then I got off and transferred to the bus that dropped me right at the front of the YMCA. There weren’t a lot of people there when I arrived, which was fine with me. The weather was hazy and mild and the teams were warming up and getting ready to play. 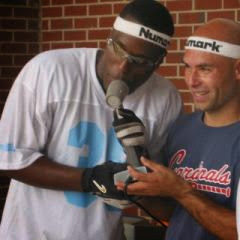 The first game was Sure vs. Rane and I notice immediately that Lego is the head of his team, while the team was wearing white jerseys with SURE on the back and number 35 on all of them, he’s wearing a St. Louis Cardinals shirt.

He’s a small and mighty firecracker of a softball player and he takes it very seriously. Lady D showed up and we talked for a minute while watching the game.

She was playing for the Martini Ranch team and I asked her if her team had practiced. She said no and we laughed, both of us knowing it should be a fun game to watch.

Sure was shutting out the Rane team, 17 – 0 in the 6th inning so they just decided it was over. During the game when their team was at bat Lego and XL were getting on the stadium mic to announce the players and were having a blast with it talking about how a player’s shoes completed his ensemble. It was a riot.

The next game was Martini Ranch vs. Sound-bar. Much to her surprise I’m sure, Lady D pitched the entire game. It was great, she hit two players with the ball and both fell to the ground rolling around and laughing, but she also struck out two players consecutively. Sound-bar won that game.

The entire day the DJs were taking turns playing really good house music. It was blasting from the speakers and every once in a while someone on the field would start wiggling their butt. The music only added to the tremendously fun atmosphere in the ballpark. 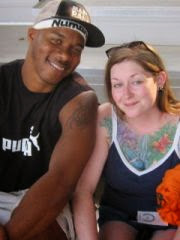 The final game was about to come on when I got a call from my partners in crime, they were finally awake and on the way! I was glad because they were brining me the other camera battery and I hadn’t gotten to take many pictures of the Martini Ranch game.

At one point, while I was running around, the ladies that were in charge of the scoreboard and announcements let me announce Mark Grant coming into the field, and when Jefferson and the gang got there, I got back up on the mic to announce Bear Who?

I was so excited as I said, “Stepping to the plate, Number 35, again, Bear Whooooooooo!” I was announcing the players on the stadium speakers!

They also gave me a t-shirt from the game. Sujan, one of the girls working, was super nice and said since I’d been there all day I could just have one.

I got a minute to chat with Mark Grant, whom I haven’t seen in a long time, right before he had to go back on the field. He volunteered to be the umpire for the last game and things immediately began to get intense. They started arguing over plays and the arguments escalated a little father than normal. But they were soon resolved and the game continued. Sure Team ended up beating Sound-bar 7-2.

Even after the party with Jevon Jackson at Moonshine; seeing Diz, Justin Long & Dayhota at BigWig, as well as a trip to Smart Bar's Metro Area to see Morgan Geist and Darshan Jesrani, I think I would have to say this softball game was the best, hands down.

Seeing people that you have heard of, that you know, or that you’ve followed musically for quite some time playing softball is just straight up awesome. I think the idea was a fantastic one and hope that they can continue on and make this a Chicago tradition.

For more photos of the game, just visit the Festivals & Cultural Events section of the gallery! For photos from some of the club nights in Chicago, just check the Club Nights section!

For more information about the Chicago House Music Association, visit their website at ChicagoHouseMusic.org

View Photos from this Event
zine.v1.stories