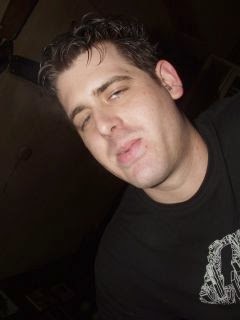 photo by todd ~ DJ Solaris hails from Kansas City. He produces as wells as spins-up HardTechno and can be found pounding out of the speakers in many of the larger cities around the United States. He plays Hard Techno, has always played Hard Techno and will probably continue to play Techno until the day that falls over dead on top of his turntables. Here's Solaris' picks for the month!

PrimEvil - Felipe & Nicholas Bacher - RVL049 – This one is defiantly worth the trip to the sandman. A nice floor chiller after a hard night of bangin’ it to the break of dawn. Bring them down like this, and you will leave them in the happy place.

Cluster - LDC vs The Shredder , Lenny Dee - CLUSTER66 - What can you say about a label that has proved itself over and over? Well at least they are consistant. And this one doesn’t stray away from the pack. A good cruncher that beggs for prime time. Keep your finger on the pulse cause the trigger is bound to get pulled.

Iturnem - Mistress Barbara - IT016 - Who can argue with the mistress of techno. A nice banger with a latin tip. The flip is a bit more latin and a bit less bangin but the baroness would be proud that her minions would still groove to the beat of this drum.

Wet Music - Misjah - WET021 – a nice driver here. Something good for the build up to the harder floor knocking style we all love. A good groove to get everyone in the mood. Beggin to be laid.

Energy UK - Christian Kouijzer - EUK010 – a nice banger here. A bit more on the acid edge than I have been use to of late. Of course that can be a good thing. This is defiantly one of those things. Also has a NRG mix on the flip side for those of you that are to afraid to play with the big boys.

The Gangsta E.P pt. 1 – Alex Calver, Dj Hardrive, Matt K. and Kid Dynomite. - Glitch records – Now I know this isn’t out yet…but what can I say I got to give you the low down on the newest stuff. So keep an eye out for this one. Nice minimal builds and a good driver for all times. Who can argue with the original gangsta?

Carnage - Switchblade– CARNAGE005 – Nice and mean…what can you say? Hard things like this and if she didn’t want it then.

LK - Lars Klein & Ryuji Takeuchi – LKR03 – Hard and brutal, nice and dirty…can we get some water? I mean common with all that grinding away you got to be thirsty right? Well here is a nice drink of crushed glass for you.
zine.v1.stories