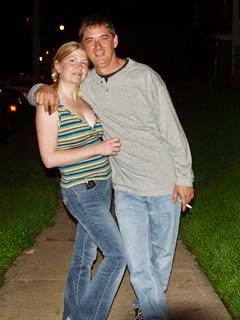 This month's cover is a photo taken by Todd Urmanic while working on a story with bPositive at the WEMF. From the sounds of things, she had a really great time and heard some fabulous music.

Our friend, Monkey took this one of Sherri and I, just before we left for the White Trash Party at Kabal, a few weeks ago. That was quite a visually entertaining little party, with most everyone in costume and mullets every where.

This was definitely a month for unique things though. I finally made it to the Beach Club. why do I wait until so late in the year? Funny thing is, everyone else seems to do the same.

The Pitch Music Showcase came around again and I thought that I was going to go and photograph at their awards, but I ended up being booked elsewhere that evening and so was forced to miss them.

I played out this past month at Digital Playground. That was a good time. I also hosted my annual BBQ which was a pretty great time too. Thanks to all that came out and played and had a good time!

Mostly, this month I randomly stopped by all kinds of places in club land. Dealt with the bookings overlaps and ran in to a few pleasant surprises here and there. I was very pleased to find myself at Chakra when Paul Anthony made a surprise visit there and spun some rekkids for a couple of hours, taggin with Johnny Tremayne and Tony Markham. I think everyone in that place was dancin.

On a random stop by Davey's Uptown to meet someone before going over to The Empire Room, I got another little surprise. The return of Submission. This time, with a bit of a more burlesque edge. From what I understand, they are bringing it back to the last Monday of every month. It was a pretty good show and kind of set the pace for the rest of the night when we bounced over to the Hustler's, Pimps & Hos party over at The Empire Room. Another funny little theme night. Everyone seems to love them though because they always seem to go off.

I dropped in on KCs 25th Ethnic Enrichment Festival as well this past month. It was mostly ok, if you like food. It seemed there really was not a whole lot more to it. They had a few displays, but nothing overly spectacular. I suppose it's good though.

Overall, it's been a rather entertaining month and I think September is going to be as well. Things are picking up and there's a lot of really great shows coming up over the next month and even in to October, so get ready.


See You On the Dance Floor!