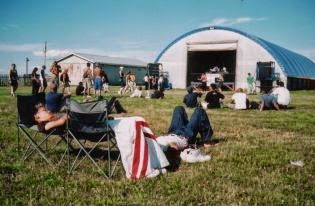 Story & Photos by BPositive ~ Why do some promoters and even many members of the public persist in accepting sub-standard conditions at clubs and dance events? This practice is not limited to amateur promoters or even to raves. I have been to supposedly “world class” clubs where the environment was too hot or too crowded to dance. Or, let’s not forget what is a growing problem in the music industry – dangerously loud sound levels.

Recently, I traveled halfway across the continent to attend a large rave festival. The promoters are very experienced and known for throwing world class events. Nevertheless, this did not prevent them from missing one very important element of event quality – providing a safe, enjoyable environment.

The temperature in the building that functioned as the main stage had to be well above 90 degrees Fahrenheit, and soon was also very humid. And this was despite unseasonably cool weather outside. Imagine if the weather had leaned more towards the normal upper 80 degrees.

Anyway, there wasn’t a breath of air moving anywhere in this building. It got so hot that the slight little air current stirred up when people walked by felt like heaven. Obviously dancing in this environment was not a good idea, yet there were an awful lot of young people who were running on adrenaline, endorphins or something else who were not taking sensible precautions or pacing themselves appropriately.

The security guards were under strict orders not to allow any of the doors to be open at all, except for the one being used for entering and exiting. According to the security guards, this was due to noise complaints from the towns (more than 5 miles away). Apparently, the promoters felt they had to go along with this in order to prevent the event from getting shut down.

Pretty soon most people were merely standing or sitting and bobbing their heads to the incredible music that was playing around us. I was extremely frustrated that the promoters had provided such pulse-pounding, world-class music yet the environment was so hot as to make dancing to it dangerous.

My brother and I hovered around the fringes moving from door to door as the security guards could not keep up with the overwhelming number of people wanting to get some air. So, occasionally, someone would succeed in getting a door open for a while and the air in the area near the door would cool down enough to make dancing somewhat bearable.

Some people experience music by singing, some by playing an instrument or DJing. For a large number of people who attend dance events, they experience the music by - need I say it? - dancing. I realize that even in the average crowd of dancers, I am unusual in the pleasure I get from dancing, and in the frustration I get when it’s too hot or crowded or (name any other similar problem) to dance. But, in the case of this rave festival, I watched in concern as hundreds of young people were dancing hard and hardly drinking any water. At one point, the paramedics even had to come in and help someone with heat illness.

I couldn’t help wondering why the organizers had not done some rethinking after Friday night and rented some industrial size fans for the main room. In the states, fans like this can usually be rented for about $25 each. Six or eight of those would have made the environment a lot safer.

A second option that no one seemed to consider was turning the sound down a little. The sound was almost unbearably loud, especially later in the night when DJ after DJ must have pushed the levels on the mixer. Perhaps the music was pushed so loud in an effort to out power reverb that was bouncing back from the metal walls of the building. Nevertheless, the sound could have been notched back quite a bit and still have been loud enough to do justice to the music.

I can not believe that we have become a culture of people who would rather sacrifice the health and welfare of others than slightly reduce our enjoyment of the music. If, as the venue manager later told me, there had been noise complaints about the bass from as far away as 5 miles, why wouldn’t we consider turning down the music as the first option rather than creating an unsafe environment by keeping the doors closed?

I may never get an answer to that question. But, it was certainly on my mind as I mentally tallied up whether a party with these conditions was worth a trip halfway across town, let alone halfway across the continent. I can only hope that the promoters learned from this experience. Maybe a few more will read this and think about it when they organize their next event or club environment.
zine.v1.stories