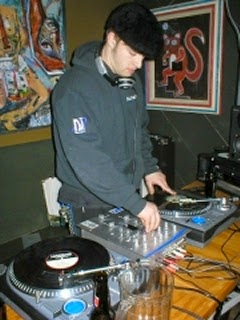 Intro by Brent Crampton ~ Photo by Morgan Claiser ~ DJ FLASH is a DJ, re mixer and producer with 8 years of experience. With countless residencies, guest spots, opening and headliner spots throughout the Midwest over the years Flash has gained a reputation inside and outside of his community as a progressive musician and a high energy performer. As a producer, Flash has developed a style all his own through his 3 full length self-produced albums and his remix work for artists such as Fugazi, Classic, MC DL, Eye's Last Glance, James D Stark & more. As a promoter, Flash has organized and developed over 100 events throughout the years and has recently been the co-organizer for Iowa's "515 ALIVE" electronic music festival, head organizer for the PRESENTER series (see info below) of events & as head resident DJ at Des Moines' LIFT OFF weekly event. Flash recently opened a new 24 track production and recording studio in Des Moines specializing in Dance & Urban music and is working as the head engineer and producer there. He is the head of Iowa's prestigious electronic production team, Twilight World Recordings as well as owner of the new groovePRO multimedia company. DJ Flash's music production style is all encompassing. He journeys through all styles of electronica from jazzstep D&B to Epic Trance to ambient Trip-Hop. However, if you were to see Flash perform live today you could expect a high energy set consisting of a funky and progressive blend of techno, house and breaks with accents of turntablism and scratching. Flash's style benefits not only from his broad experience but also from 5 years of work as a Pro Sound designer, installer & gear technician as well as the head gear & vinyl buyer at Central Iowa's only DJ supply store, Keeper's Music. In addition to being the sole supplier for DJs in Central Iowa, Flash has also developed a training method for DJs and, over the years, has helped over 20 DJs learn the finer points of the art of DJing as well as develop their style in a live aspect as well as a studio aspect. Look out for Flash in action at his new monthly event in Des Moines - Spin Cycle which will be bringing in national talent such as Nigel Richards on August 7th.

6th Element "Together" (Malinconik Mix)- Link Records - Wow. This is one of those tracks you got somewhere, never played and put away only to be found 2-3 years later, that makes you say, "damn! where the hell has this thing been?" This whole EP is a remix of an old banger and the Malinconik Mix specifically is an amazing progressive tribal BANGER with a huge hands-in-the-air buildup and as any good DJ knows...tribal goes with pretty much anything and drums get people dancing.

Urban "Super Ball" - International House Records - Lately I've had a hard-on for pretty much anything off of IHR. Back in the day the stuff was good, mediocre filler fodder but nowadays Bad Boy Bill has really turned that label around and it shows with this track by veteran producer, "Urban". This has a really funky bass line with a filtered, almost tech, riff that just builds and builds until one main whiplash breakdown and frenzy buildup disrupts the whole track. Lots of room for mixing and tricks.

C-Mos "2 Million Ways" (dub) - EPOS - C-Mos (aka Conga Squad) deliver plenty of funky house...most of it is mediocre funky disco style beats but every now and then you get a jaw dropper like this. An Amazing anthem style house tune that sounds like elements of Casssius with Armand Van Helden, only with a little more danger in the mix via a tech-style bass kick. It's also got a great feel-good breakout that'll get most people up on the floor.

Kadoc "The Nighttrain" (Kosmonova Remix) - Nukleuz - Call me old fashioned but I still love to drop this classic track every now and then to see who on the floor remembers it. Now I've got 3 new remixes of it, courtesy of the peeps at the U.K. super label, Nukleuz. All 3 of the mixes are good in their own rights including the Warp Brothers and Bass Solution mixes but the Kosmonova mix is the one that really sticks out for the house DJ in me. Lots of energy. All Aboard!

Raoul Zerna "Funkin on the Floor" - Cymbol Recordings - Another heavy filtered funker with a great Chicago feel to it. It has a lot of elements that remind me of Olav Basoski's harder works. It features a great techy filtered bass line, really progressive snares and a cool little female vocal snippet proclaiming that the track is " funky". She was right! It is!

Benny Benassi "Able to Love" (sfaction mix) - You - Maybe I'm falling into the pit of "UK Hitz" but I love Benassi's previous work on "Satisfaction"...you remember the award winning track with the girl telling you to touch her that you couldn't get away from last Winter/Spring? Well he's crossed the same vocal effect style of that song over to a much more heavy sounding tech-house BANGER with " Able to Love" and every now and then you just gotta throw down the angry shit to let 'em know you mean bizzness.

Antoine Claraman "What!" - Cyber - So like 4 years ago I got this amazing filtered tech-house white label for free from a distributor that I just couldn't stop playing for 6 months. A couple months ago I order the new Antoine Claraman EP and, lo and behold, it's the same white label from years back. So now I got this just ridiculously sick double routine that I drop with this track, which is just ridiculously sick in itself. It's hard filtered stuff with a sample that goes like "what!", all hard sounding. It'd be great if I had a Dave Chapelle sample of Lil Jon to mix it with! The flip side is dope, too.

Bad Boy Bill & Hatiras "Freq'd" - International House Records - Another excellent track from the IHR camp. In my opinion Hatiras is a bad mutherf***er and you get one badass track here. It's a standard house beat with this cool angry sounding new-wave-ish riff that drives the whole thing. Lots of cool little flip-backs on it make it ultra fun for beat juggling and doubling. Had to buy 2.

N.S.D. Project "in the hood" - Nine Records - I've been really impressed with the music from the Nine label so far. This track is by the N.S.D. project (Nique & Vitamin D ((of the floorfillerz)) and Sean Biddle). It's pretty driving basic house with a really funky riff and some little analog "bloops". Also lots of flip-backs and some interesting drum programming make this one really fun for the active DJ.

Intexor VS. Sinesweeper "Physical" - Spot On - I've had this guy in and out of my crates for 3 years now. It's not an "everyday play" type track but it goes real well with my current top 10. Plus it's one of those tracks that when you drop it, all the house DJs around you start scrambling to trainspot, so you know it's good! It has darker disco-ish riff that pretty much runs the whole thing. It's got a really Joey Beltram type of vibe and that's a good thing.
zine.v1.stories