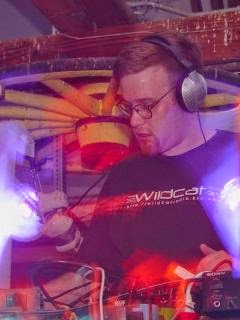 Intro by Brent Crampton ~ Photo by Tim Toll ~ Ethan Bliss is entering his third year as host and resident DJ of "The Saturday Night Rave", a weekly mix show on K-State's student radio station "The Wildcat 91.9". Coming from a musical family (having taken piano, trombone, and drum lessons during his younger years), he began experimenting with DJing and beat matching using computer software and MP3's four or five years ago, but then later moved on to start buying decks and records. His background gives him an interest in musical variety in his mixes so that now he spins a range of house, progressive, and breaks, while still keeping a smooth flow. Beside the radio show he also spins at the occasional party or club night, and has recently started spinning on a regular basis at Chakra. Here's a look at some of the releases he's been digging lately and that have been getting airplay on his show and when he plays out.

Infusion - Better World, Audioriot - New single from Australian progressive trio Infusion. The original mix is subtle affair, suitable for a deeper progressive set, but what really does it for me here is the Adam Freeland remix, a nice upbeat breaks rework of the track, making good use of the vocal, and incorporating some nice rock guitar sounds.

Shiloh vs. Marc Mitchel - Run 2 the Light, Method - It's been just0 over a year since Canadian progressive breaks group Shiloh, brothers Justin and Colin Moreh, released their inaugural single "Will You Ever Come Around" on Baroque imprint Electrofly, and they've been on a roll since then, a trend that continues in their new collaboration with progressive house pioneer Marc Mitchel. Both original and dub mixes of this track are excellent, having a slightly trancey feel but with a bit more groove and complexity. In the original mix a male vocal is a bit recessed in the mix, with an absolutely lovely chord progression on the hook. For the dub, they dropped most of the vocals and explored variations on the riff used during the verse.

Hybrid - I'm Still Awake, Distinct'ive Breaks - This is one of the more recent singles from Hybrid's latest album "Morning Sci-Fi" and is one of the songs on the album to feature new vocalist Adam Taylor. The original version isn't aimed at the dance floor, so re mixers Christian J, SUD, and Gray Area were called in to remedy that. In this case the mix I've really been getting into is Gray Area's breaks mix. This mix features the full vocal from the original version and has a great build up to the breakdown which occurs about 2/3 of the way through the track, at which point it drops into an acoustic guitar riff from the original with some added stutter and reverb effects, then adding the bass line& chorus and building back into the full beat with some kind of electric guitar sound in the background. Great peak time breaks track.

Piece Process - Move Your Body b/w What Is Life, Looq - Great0 tribal/tech record out on San Francisco label Looq records. "Move Your Body" has a great upbeat techy moving lead accompanied by the repeated vocal "move your body". "What Is Life", on the flip, has a little more of the tribal feel and has a slightly more laid back feel in the chords/pads used.

Ravi McArthur - Come and Get Some b/w The Test, Visitor - Nice juicy tech house record. "The Test" is a sultry affair with a nice swing to it, while "Come and Get Some" has a little more energy to it (although the percussion still isn't quite as densely packed as the average techno record), with a good dirty bass line.
Slater Hogan & John Larner - Busted Ass Buick EP, Icon - This record from deep house label Icon features three tracks "Mardi Gras", " Flea Market Funk", and "For My Love". They fall on the more funky/upbeat side of deep house and has a bit more organic sound to it with lots of acoustic guitar, bass guitar, and horn sounds.

Joey Youngman - Studio Maintenance EP, Fetish - The tracks on this record have a stripped down and swinging "Chicago house" feel to them. For the most part, the synth riffs and other musical samples take a definite back seat to the beat, and the tracks feature an occasional short sung or spoken vocal.

Demarkus Lewis - Fuzzy Slippers EP, Flat & Round - Two of the tracks on this record-"Crunch" and "Revert to Now"-lend themselves quite well to the end-of-the-night deep house set, whereas the other track "I Can Do What You Do" has a somewhat darker, more techy feel. " Crunch" was the track on here that really caught my attention, with its great melody/chord progression. In the foreground it features a sax lead and some male scat vocals.

Nathan Fake - Watlington Street EP, Saw - Nathan Fake has been making waves in the progressive house community since the release of his single "Outpost" on James Holden's "Border Community" label, but his productions have a definite electro/techno sensibility to them. Now he's here with his two-record release, The "Watlington Street" EP on Satoshi Tomiie's Saw label. (Since when is a two-record release an EP? Don't ask me.) My primary interest in the release is in the two tech house tracks on the first record-"Bored of House" and "Adamedge". " Bored of House" is a laid back swirling affair, while "Adamedge" (my favorite track on this release) is more aggressive. The three tracks on the second record are "Underberg",

"Overdraft", and "Pearyland". I'm not well enough versed in the intricacies of techno to be certain, but I think "Underberg" might be aggressive enough to qualify as a straight-up techno track. The last two tracks of the release go off in different directions, "Overdraft" being almost, but not quite, drum'n'bass, and "Pearyland" being an ambient track.