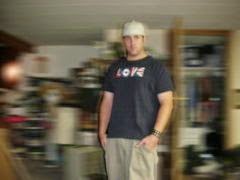 interview by Brent Crampton ~ What’s the most overlooked aspect when a promoter throws an event? Is it the lights? Sound? Air Conditioning? Well, while we have all been to our fair show of sweaty parties, the most often overlooked aspect of a party is the dj booth! How often have you walked into a party with lasers flashing all across the room with thick smoke highlighting their presence and a thick wall of bass thumping your chest? As you make your way to the source of the esoteric beat, you find thousand dollar equipment resting on a fold out table! Is there something wrong with this?

Well Jason Buss, a humble dj out of Mason City, Iowa, thinks so. While he’s not dj’ing deep house and messing around on his coveted macintosh computer, you can find him in his basement perfecting his craftmanship in building the perfect deckstand. Buss has began the company, Foundation Deckstand (http://www.foundationdeckstands.com), to fill in the need for dj’s and promoters to have a quality piece of furniture to set their much appreciated dj equipment onto.

What is this company and what service do you provide?

The company name is Foundation Deckstands. It is a startup that is concentrating on custom designed DJ Tables, or better known as Deckstands. I am pretty much the sole person behind this right now. The service idea behind my company is to work with the promoter, the club owner and/or the DJ to create a custom designed deckstand that will suit their needs in terms of equipment, strength and portability.

Where did you get the idea and motivation to do this company?

The idea came to me a few years ago in the many apartments I lived in in San Diego. I was tired of trading eating space for table space, or the similar places we all have been known to setup our gear on. I was limited in the aspects of places to build my ideas in those small apartments, so the idea was put on the backburner for future consideration. After moving to Iowa and gaining the added space of a basement and being able to build a full fledged workshop, I now have the space needed to get these designs out of my head, and into actual working pieces. My motivation and energy behind this idea and company is the fact this is one of the most neglected aspects surrounding our gear and DJs at events. Slap a few cinderblocks and a sheet of plywood together and your good... NOT. My Thinking is why not move forward with that, why not invest in a secure housing that can not only provide a custom solution for keeping your gear stable and more organized, but also more presentable and reusable. 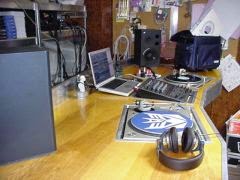 Why should someone buy your product?

I try to set my mission in a different direction than those companies I previously mentioned. I think the reason someone should, and would entertain the idea of getting a deckstand through me is the complete customization available. I am pretty much limited by the creativity of my customers ideas along with the limits of the materials being used. For instance, I am now entertaining designs for a production company on the east coast that is made entirely out of acrylic materials. The end results are pretty much up to the design creativity and the requirements for the Deckstand.

When will the company be fully operational?

Im pretty much in the holding status ready to hit the tarmac and turn up the engines and fly away with this company. Foundation sponsored a pre-party for the Coachella Valley Music Festival in Palm Desert, CA earlier this year, which was great promotions for the idea on the west coast. And I am working on building a few more designs to take to WMC next year to showcase in front of the majority what I can offer. The next 12 months are going to be hard on my router and table saw...

So what's your story in a few sentences? You grew up where, moved to cali, started djing, ect.

The cliff-noted version of me... Here goes, mind the run-on sentences. Highschool in Clearwater, FL. Introduced to the Rave sounds in the underground spots of Tampa, Ybor and Orlando in the early 90's. The Navy brought me to San Diego in '93 where I quickly fell into the up and coming spots in that beautifull city, like the RomperRoom and Hedonisim. The same old "got decks and got records" story as many, cause of the love, the ability to share. Ended my relationship with the Navy, but stayed out in Southern California for a few more years experiencing the highlight of the late 90's and early 2k parties that set the tone for this millenium. Iowa called me to it with a chance to slow down my life, reboot and restart, get closer to family that I had missed and more importantly, persue interests like these on a more controllable scale. I thought I was coming here to slow down... But I have yet to hit a speed bump, just a few snow banks... 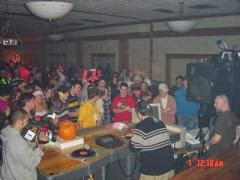 Now you have a weekly at Lorado's Bar every thursday night in Mason City.

Yeah, the weekly pretty much saves me of my daily grind job during the week here. Almost 2 years ago my partner Adam Tyler and I landed a weekly at a long time favorite bar/resturaunt here in town. They never had the chance to listen to anything other than radio played electronica until we started. We ended up having a good following and actually some regulars requesting songs they had heard us play before. It was a great feeling. the weekly had to stop for a little bit a year ago due to the request of the owner. Recently she came into contact with me and invited me back to continue what we had started so long ago. Its a great way to get DJs and Live PA's up from all over the state and regional locations to this weekly to show those interested in this type of musical style, that there is alot of different ways for it to be presented and a whole quiver full of people like them, interested in it as well.

Anything else the people should know?

Foundation is going to be supporting a local event in the midwest in the next month. Blueshift in WI the weekend of August 6th. Make sure to stop by the Ubersonic (Iowa) tent and check out my latest design which you can see a picture of on the site as soon as I get pictures of the build up. This design in almost complete and is being made for the winner of a drawing held late last year.
zine.v1.stories