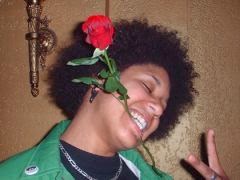 Interview by Phelyne ~ Photos by Phelyne & todd ~ It's time to bring to the table one of Kansas City's most beloved female djs, cQuence. This woman has been a key element in the local Kansas City underground scene and has continued to be an influence for the past 3+ years. She has been one of the people responsible for providing a free weekly DnB night (Wednesday Perk at The Cup and Saucer) for more than two years. On top of a successful weekly Dnb night, she has performed for hundreds of partygoers at several memorable events hosted in Kansas City and all across the Midwest. There is no denying cQuence has made a positive mark on Kansas City. Knowing she has a lot of great things to say about our culture, I decided to sit down and talk with her for a moment.

What musical influences have steered you in the direction of drum and bass?

I have been involved with music since I was 7. I started playing the school orchestra (violin) in elementary school. When I was 12, I started playing the guitar on my own. My Grandpa gave me this old raggedy acoustic guitar and I started buying tablature of my favorite bands, to teach myself. In Junior high school I joined the band and took on three instruments; drums, trombone, and clarinet (I love that teacher for letting me do that). In highschool I was listening to a lot of band's and underground hip hop. I think raves were my biggest influence that steered me in the direction of playing DnB. I used to go to all these parties and dance. Then one day it dawned on me that I would like to make that music. 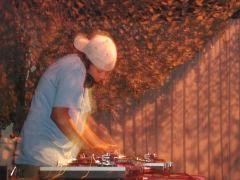 It wasn't until I was 20 that I bought my first record. It was Dj Icey's : Drive/Disco Wavelength # 19. My passion didn't come for DnB until I was about 22. I started buying up all DnB I could get my hands on. My first influences back then were Peshay, Rob Playford, Aphrodite, 1.8.7., anything Hospital, anything on EZ Rollers. All the classics. At this point, as far as DnB goes, I'm really feeling the whole brazillian influences like Marky & XRS new CD, In Rotation. Oh yea and Makoto! That guy is amazing to me. His production by far has impressed me more than any other Dj / Producer. I think he's really inovative and clever in putting together trax that are inspirational, smart, and just all around good dance music. Now, my biggest influences are my hommies. You know, in Kansas City we have a lot of raw, unbridled talent. I am consistently amazed at what my friends are doing right now. Phelyne, Edw!n, Negro Sco, Mike Conway, Alaska, & DeepConnections. They have all been doing their own thing for quite sometime now and are coming out with some of the hottest production, lyrics, & music oriented concepts in KC! Cyantific is really inspirational. He's only 22 and makes trax for one of the most reputible Electronic Music Label, Hospital Recordings. I love Punk, Indie, HipHop and ElectroClash music! The Pixies are going to be here (Kansas City) in October 2004. I definitely plan on checking that show out. I still listen to a lot of music from my past like Sonic Youth, Smashing Pumpkins, RHCP, Smiths, Cure, Missy Elliot, My Bloddy Valentine, Thrill Kill Kult, FreeStylers, Beastie Boys, Tribe Called Quest, Wutang Clan, Dr. Dre, Tricky, Portishead, Tortise, Nirvana, Sublime, Fugees, Phish, Grateful Dead, Le Tigre, Bikini Kill, Digable Planets, Huggy Bear, BratMobile, Decendents, NOFX, Da Brat, Cranberries, N.W.A, Eazy E., Dj SwamP, Dj SHADOW, GWAR, Gun N Roses and a lot of 80's. I could go on forever. Other than that, I grab a lot of inspiration from mother earth and all the other balancing energies within our universe.

Hmmm. Tough one. I don't know. I have been involved in a variety of different musical scene's growing up all over the states. I suppose if I have gained anything, it's that diversity is key in what I want to do as an arstist. I've never been able to pin down my taste in music. And I don't want to have to, either. It's more fun to just go with the flow and play whatever. As a Dj I tend to stick with breakbeats of some sort. Usually geared towards DnB. But even then I would'nt want to play just hardcore, or atmospheric, or ragga, or jazzy. I want to play it all, if I can figure it out. That's why I play so many instrument's. I need variety. Lately I have been buying up alot of 80's record's. 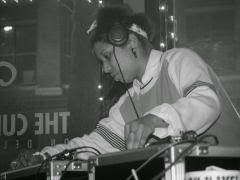 Being a major influence in the Kansas City and the midwest region, what positive things do you have to say about this region that is unique from other areas you have been?

Well one, that you dont have to live in some huge metropolis to survive as an artist. I mean, I dont think I am making a living off of Djing at this point, but I am compensated enough to keep on doing with what I am doing. I've lived in Dallas, TX for 4 years and though the parties out there are bigger as far as headliners go, and of course head count, I enjoy the KC scene much better. It is smaller and I think that allows the average Dj to be able to network a lot better. Whereas in bigger cities, if you don't already know peeps, you're a nobody a lot longer. The Midwest has a lot to offer anyone who's hungry enough to go get it. As a consumer of the music/culture and as an artist. There really is a little bit of everything you could want. From electronic to punk to rock to ganstah rap to emo to folk to country to indie to tejano to whatever!! I mean, I have never been starved for good music out here. It is here. Now whether or not it's always appreciated is another subject, but yeah, I love being a part of a scene that has room to grow. That means I can be a part of helping this scene grow. And so can anyone who really wants to be involved.

What do you currently feel is the state of the entire underground community in Kansas City and what do you feel the immediate future will bring to the forefront?

I cant speak for the entire scene. I do feel good energy within the KC underground scene. I have been a part of a lot of really good events here in KC, in the last 2 yrs. The Cup & Saucer will always be a resource to anyone who wants to take advantage of that platform. Just get eMail me (cquence808@yahoo.com) and forward me a demo and I will get you a spot . I know SpinStyles has some aspiring ideas about moving the KC scene towards a more educated consumer. DeepFix Records does their thing every Friday night at KabaL with regional and national House headliners. Joe Jackson is doing great thing's for underground hip hop and has been for the last few year's, very succesfully. There are a lot of promoters out here with great ideas and are currently working very hard to bring the KC electronic/underground music scene to a massively consumed level. More than anything, I can only hope that KC takes advantage of it. If your into this music then stand behind it. Dont build fences. Build doors. That can be achieved simply by supporting the scene we actually do have here.

Where do you see yourself musically in 5 years?