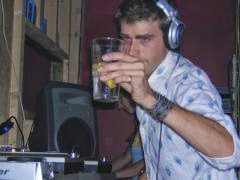 Story by Brent Crampton ~ Photo by Vitally ~ The DJs in Lincoln and Omaha are starting to break out the scratch records, juggling techniques and the two-minute-mix-transitions and it’s not because a new fad of turntablism is taking over. It’s the annual Bricktop DJ Contest! And this year promises to be just as off-the-hook as the 2003 contest. With the grand prize being 2 Technics or $1,000, there was a line of djs set to play when the June 28th entry deadline came around.

The contest begins on July 10th and will continue until the last DJ is standing. A host of panel judges, amongst them are rumored to be Zak C, Garrick Michael and Lunatik will be judging on crowd response, stage presence, creativity and technicality.

Last year the final dual came down to Mix Masta Meza and Zak C and ended in an infamously controversially win by Zak C. Most cheered, and some booed at the results from the judges. Nonetheless, the contest proved to be memorable and expect nothing short for this year too. For more info, be sure to visit The BrickTop web site
zine.v1.stories