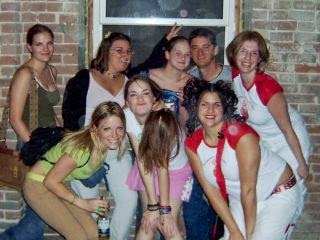 The cover this month is from the Wakarusa Festival that was held recently at Clinton Lake State Park near Lawrence, KS, looking at the Sunset Stage as it was getting close to that time.

It was definitely a long month, this past June. With everything that was going on, sometimes it was a little bit of a chore to just keep up.

It seemed as though most of everything was building up to one moment, Chaos Theory v2.0. With a line-up, sound, lights and arrangement designed to rival last year's show, it was definitely one that was worth going to. Sadly, there was a bit of an incident with my spare camera too and all of the shots from the second floor were lost forever.

I played a fun little gig down at a West Bottoms loft near the end of the month. That's where this month's editor column photo comes from. Joe took this one of me with a few of my favorite girlz.

One of the highlights of this month for me was having the opportunity to see Offtrack return and give everyone a good solid bangin' near his hometown of Manhattan, KS, with Techno Justice League comrade-in-arms n.9. Thanks for the good times, but I think I could have done without the rain.

There was only a bit of randomness this month in the photos this month. The Sister Machine Gun show down at Davey's Uptown being one of the more interesting stops along the way. That was definitely a great, up-close and personal performance. I look forward to seeing them again the next time they are in town.

This issue was a little late though and for that I do apologize. I decided just close down the office for the 4th of July weekend and just go out, play and enjoy the four day weekend. Needless to say, I had a really great time and got to spend what was probably more than my fair share of chill time with some really close friends and later on the fourth, family.

It looks like July is going to be a fun month. Enjoy the articles this month and, with all of the outdoor parties that are planned this month, I'm sure that I'll see you under stars sometime soon.


Until Next Time! PEACE!