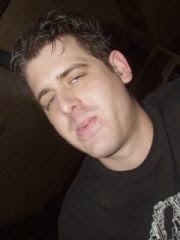 interview & photos by todd ~ Solaris is a one-of-a-kind DJ hailing from Kansas City. He plays a style of Techno that is rarely heard in the Central MidWest, but can be found pounding out of the speakers in many of the larger cities around the United States. He plays Hard Techno, has always played Hard Techno and will probably continue to play Techno until the day that falls over dead on top of his turntables. While many DJs flip flop and delve in to other genre's of electronic music, his continued dedication and devotion to this particular genre led me to seek him out for a few random questions.

When did you start playing?

I got my start in 96, got some turntables and records and doing the bedroom-DJ thing. I taught myself, really and didn't start playing out until 97 or 98.

What do you call your specific genre of Techno?

Hard Techno. Some in the Goth/Industrial compare it to what they call PowerNoise. However, I can and sometimes do play other less brutal variations of Techno.

Solaris? Where did you get that name?

My name sort of relates to the Kansas City stigma. I was playing house parties in '96 and the two throwing it kept placing me dead last when the sun was coming up. It was at a small gathering at Infinite Sun with Shalon 6 months later that I chose Solaris. It seemed to fit the situation, and after a bit it stuck. Funny thing when I gave one of those guys, who always put me on last, a mix tape a year or so later. He cam up to me and told me this story about how his friend showed him a dead body at the morgue. (First time seeing a dead body) and he was shaken up on his way home and poped my tape in. He came to tell me how that it fit the situation and his feelings perfectly....You have to love showing someone that music doesn't always have to house-y or cheerful to be good. Sometimes everyone needs a little abrasion. 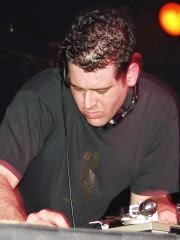 What sucked you in?

Of all things, heh, a party. It was a party in St Louis, called Eonia, I believe it was. It was thrown by Superstars. It wasn't my first party, but I had gotten a gig to Repo a car in St Louis. (I was a Repo man at the time). So, I got my trip paid for and went down to this New Years party and went there and heard DRC play before she started playing everything. She was playing Hard Techno and it convinced me that was what I wanted to do.

What was the first party you played at?

The first party I remember playing at was actually a party that I helped throw with Mike Bradshaw, called ReBirthday. I met Offtrack at this party and I played after him. He seemed kind of surprised and appreciated what I could play and we later got together to form the TJL - Techno Justice League.

When did the TJL start up?

97 or 98. It started off with Offtrack and myself. Basically, we were on eGroups and joking around and talking about Techno. At one point, Offtrack threw the name out there and it kind of stuck. N.9, Andrew Boie, then Konsept and Zack Smith came in shortly after.

It seems like everyone formerly involved in the TJL has kind of split off and gone their own direction in the last couple of years. Everyone still plays Techno in one flavor or another, but there doesn't seem to be that cohesiveness you guys once had. Is it from lack of support or just the natural course of things?

Yea. Everyone has just kind of evolved to other things. Offtrack moved to Chicago, Andrew is currently working with another site on their roster, n.9 is still producing out in Manhattan doing his thing there and Konsept became more involved with promoting events in Lawrence. We just all sort of moved away from collaboration in favor of independent projects.

On the surface, Kansas City doesn't appear to have a huge Techno following. There almost seems to be a stigma attached to it because it was the generic name given to all dance music. What are you thoughts on that? 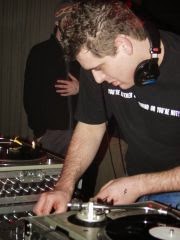 That has definitely been a sore spot for a lot of people that know what real Techno is. That stigma carries over to the promoters, who seem to have gotten it in to their head that nobody likes Techno and consequently think that nobody will come. Those that do understand though, such as Cicada Rhythm have continually done successful Techno events. I even brought DDR to do a live PA here and it was crazy! So, I know that Techno is alive. I mean even Woody McBride, the last time he was here, played Techno and everybody loved it. The newer promoters just don't seem to have as much respect for Techno as they do House or Jungle, or maybe they just don't understand.

So, what are you up to these days?

I'm always mixing something or working on tracks, between school and work and everything else. I do have a mix CD out called Syntax Error. An hour plus of Hard Techno. I also have a CD with 4 of my own original tracks that I have been distributing to various people during and since our trip to Miami. Techno can stand alone, but the structure I like to develop within my tracks and mixing are a piece of myself and how I feel. This keeps me working and thinking as I evolve.

You don't seem to play a lot here in the MidWest, but you seem to get gigs just about everywhere else. What's up with that?

The demand is there, but I think it kind of goes back to that Stigma, which is really bad here in the MidWest. The promoters in KC don't seem to pay as much attention when people tell them, "I love this stuff. You should book this guy." They seem to prefer to "Stick with the Safe Bet". Other cities seem to be a little more ahead of the game on this one and when their people ask for Techno, they get it. 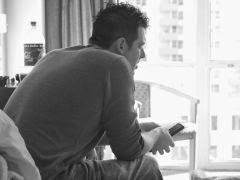 It was great tagging along with you to your gig in Springfield, Hex. You opened up for an Industrial band, The Lonely. Things were fairly normal when we got there, but I noticed when you started playing... I think you shocked and surprised everyone (in a good way). You definitely had their attention. I saw heads bobbin and some even decided to get up and dance. Several that I talked to really were pleasantly surprised. Any thoughts on that night?

HEX was great! I can only say positive things about the night. These promoters enjoy their work as much as I love playing. I mean when a promoter spends 3-4 hours setting up a club night beforehand and then tear it down, you know they are committed to throwing a quality event. You have to love it when people who never heard techno realize what they were missing. Combine that with the headz coming to support and you cant go wrong. I just have to remember to watch out for this crazy girl who ran around all night calling me a super hero... Also, Congrats to Large Marge and Shagee for thier engagement!

What is your Top Ten Techno that you are currently playing?

Do you have a personal favorite?

That has got to be the hardest question when you have played over a hundred events...I can tell you one of my first favorites that I played was Plastikmans Recycled Plastik EP. My personal favortie mix of all time is Ritchie Hawtin - Mix Mag Live.

What dates do you have coming up?

Maybe another party in Springfield. Those guys love Techno! The harder the better.

Learn more about DJ Solaris, keep up with his travels and download some mixes at his web site, www.djsolaris.com.
zine.v1.stories