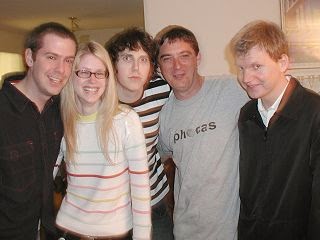 My travels this month were a little bit limited and I stuck pretty close to Kansas City. There was a trip to St Louis, for the infamous Keoki, Omaha for Queens of the Underground, an all female DJ lineup, and a Goth / Industrial / Techno night called Hex down in Springfield.

All in all some really good events that definitely made for some interesting memories.

Probably the most memorable event this month though, was a Going Away Party for a couple of really good friends and fun DJs, Shandi & Velvin. Eric had a lot of fun with the banana that evening and Shandi "Shanthrax"ed one my phocas shirts. I am really going to miss them a lot. I wish them all of the best in their new quest in New York. Hopefully, they will come back and visit sometime.

I made a couple of other strange side-trips of note this month. Polski Days in Kansas City, KS. I usually go every year. Though I'm not in the least bit Polish, it's always lots of fun. Jon dragged me down to Harling's to check out this Irish Finger. Fortunately, it turned out to be an Irish Singer. Some of my family that ride motorcycles dragged me down to F.O.G. Cycle also. That's a pretty cool little place. They are having a huge street party in June and another in late July. I hear there are usually thousands down there. I'll have to check that out, eh?

Finally, for the Sunday before Memorial Day, Two Heavy Enterprises and ~phocas~ hooked up to throw the party "Memorial Day Salute" at the Empire Room. We had a pretty good turnout considering we only had a week to promote and most people were at the lake.

Speaking of the Empire Room. I also have been keeping an eye on their Monday night called "BLO". Look for an upcoming article on that next month!

I hope you enjoy what's inside this issue. We are doing are best to keep you informed and on top of what's REALLY going on!!


see you on the dance floor