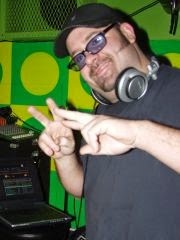 Interview by Brent Crampton ~ Photos by todd ~ Sydeburnz has been a mainstay in the Kansas/Missouri scene for the past couple of years. Having made a rapid rise to regional fame, Sydeburnz has been turning heads with his signature style of “Bangin’ NRG” hard house along with his recent indulgence in the occasional deep tech house set. Sydeburnz is an eccentric man of ambitious character with a down-to-earth personality. His stage presence commands the attention of the dance floor while his crafty mixing techniques leave trainspotters entertained. I took some time out to chat online with Sydeburnz and here is what he had to say .

How did you get into DJing?

Well, kind of hard to really pinpoint the exact time. But I remember going out to the teen clubs as a spectator at first. I used to hang out at “The Swing,” some dive hole in the wall club on 72nd and Blondo (Omaha, Nebraska). They played mostly early hip hop and alternative dance anything from Guy to Sinead O'Connor.

So did you grow up playing any instruments?

(Laughs) I used to fake playing drums. Well, me and three of my friends went as “KISS” every Halloween and I was Peter Criss. This was back when I was in like 4th grade. And after school, we put on a fake concert in our apartment complex.

So you used to go to teen clubs, what inspired you to play music yourself?

Well, I have always been into music and the club I used to frequent was cool. But the dj always played bad music, but always got the gigs because he was a pretty boy.at the time it wasn’t so much about the mixing, but about the tracks that everyone wanted to hear and he wasn't playing them. His dad owned the club and all the girls wanted him, so he was the one to be in the spotlight. I was always bringing in my records for him to play and finally got sick of helping him get better. So I started playing a lot of house parties for friends. 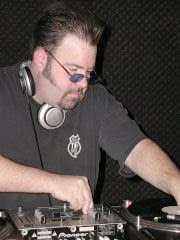 It seems like you have some sort of spark that pushes you ahead of the pack - where did you get that from?

One specific example I can remember. . . I spent a few months in San Diego and saw a video by MC Hammer on their public access channel for his song 'Pump It Up' and bought the 12" single out there. Nobody in Omaha had heard of him yet and I was the first person to play him there. The dj from that club conned me out of my copy for $20, but I just called the store I bought it from and got another copy for $6. I came out ahead and still got the props for playing him first. That don’t mean nothing nowadays though - Hammer is done. I won’t deny I like to be the center of attention and I've never been able to really play a true instrument. But Iv’e always had a good ear I’ve been able to tell when someone was on the verge of making it in the music business.

So tell me about how you got into managing a band?

Well, with my then new job working with a used cd store, I met a lot of local bands and they always complained that there was nowhere to play in Topeka. I thought that the kids needed something to keep them connected with the music so I put together a concert in the parking lot of our store. The band, Effigy, had such energy about them. They really got me hooked. I ended up selling my dj rig to put out their second album. As soon as the album came out, their drummer quit and moved to Denver so the band kind went on a long break after that. We had an east coast tour lined up for the cd release but had to cancel all the dates to find a new drummer. Then when we broke our new drummer in, the bass player quit. I wasn't having very good luck.

So that all fell apart and you moved on?

About the same time I was also scratching for a hardcore band in Topeka called “The Trip Hop Children.” That is really the band I took from zero to sixty. They had five songs when I started jamming with them. Within six months I had driven them to one of the top acts in Topeka. We had over 20 tracks and were in the studio in that short of a time frame. I had also organized shows in the area that helped us raise almost all the cash needed for our studio time. We even brought “Noizewave” to Topeka to play at one of those shows. Right when the cd was being pressed the band decided they didn’t want to be on the label because it seemed i was controlling the band. So I quit.

Where did you go from there?

Back to the rave scene. I was sick of bands and one of my buddies told me about a rave in Omaha called “Alpha” (by Delicious Productions). Some kids dropped some flyers off in my store and he talked me into going. 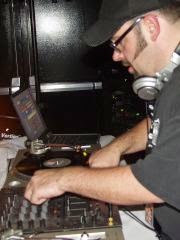 Did it change your life?

It opened my eyes to how much more creativity I had when I was truly DJing. It was not just an event, but a lifestyle. So I started helping out with some events in the Kansas area just to meet more people like me. Soon I met DMX and Kid Icarus at the Zen Temple Tour and those guys were commanding such a response from the crowd that I was in awe. The music sounded different from what everyone else was playing so naturally, I was was somewhat drawn to it. Well, I was still without my dj rig from selling it to put out “ Effigy” CD, so I started downloading tracks that were on those guys' cd. I had a cd rig that I spun on at that time. After awhile, I found I really enjoyed the bouncy stuff, but the dark stuff was more inspirational. I was into Seb Fontaine a lot, but it was hard to mix the two and since there were other dj's playing progressive in the area, I wanted to stand out and play something different.

So when did you start playing out?

What was the best party you have played?

I would have to say it's a toss up between Chaos Theory in Kansas City and Elevation 3 in Ames Iowa. Chaos Theory was fun because it was a mega-event. My set that night was voted the best local performance of 2003 in KC. Elevation was fun because I hardly knew anyone up there, so it was a true test of my abilities and not because they knew me.

Who do you see climbing the charts from the midwest?

That’s a hard question. I know a lot of dj's that are very talented, but have no desire to promote themselves. It’s hard to climb if you don’t want to climb. A few KC dj's that I think are really promoting themselves are C-Vaughn, Atom Bryce, Xan Lucero, and Frooky.

Where is the KC scene right now? Up? Down? In between?

I would say KC is on its way up again. This is the third upswing in our scene I have witnessed in the last 3 years. I think it's mostly due to new promoters doing events. Everyone has different tastes and different styles of promoting events and putting together lineups that people really want to see. 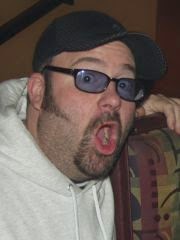 Moving on, do weeklies help or desensitize the scene?

Too much of a good thing can be bad.

What gives you motivation to keep djing?

The energy of the crowd. When I get behind the decks and they take me to a level higher than I can hope for, it really makes me want to keep going.

Well, I bought final scratch about a year and a half ago. Since I can download something and play it right away, it has allowed me to be a bit creative. I heard “Swayzak's” Fabric 11 cd and was really turned on by some of the stuff he put on that mix.

Oh, so it has nothing to do with you getting older and you may
want something a bit more chill?

Not really. I have a lot of people requesting that I play that stuff out, but I still want to bang it as hard as i can

As a dj, what's your next step?

Well, since I have a family, I just want to play out as much as I can without depriving myself of watching my baby girl grow up. My preference is to keep it as a release from life. More as a hobby and not so much as a business. If I happen to make it big, I wouldn’t object. But it’s not a priority for me.