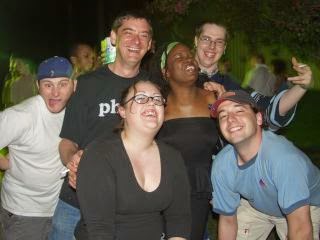 More traveling this month, though not to very far off places.

This month, I made a trip to Manhattan for the party "Up!" and to hang out with some of my friends (photo) stuck down in that little college town. The venue that they use there is very cool. You can even play a little basketball if the beat moves you in that direction.

The cover this month comes from the party "Life... As We Know It". That party, as well as a couple of others proved to be a catalyst for this month's main article, "It's Getting Hot in Here: A Few Thoughts on the Spring Saunas". Sometimes it's hot because you're dancing hard and sometimes it's hot because there isn't as much planning going in to ventilation as there should be. Read up and let me know what you think.

I made a couple of trips to Frisky at Kabal for Miss Honey Dijon and to join DeepFix Records in celebrating their Fourth Anniversary with Rob Mello, as well as an interesting little 420 party that was held by the guys that do the regular Tuesday night called "Ritmo", a Drum N Bass and Jungle showcase.

The weekend before though, I was priveleged enough to be able to witness a really nice little warehouse party in St Louis called "Rejuvenate". It was put on by a collective of several different people that were formerly part of some rather well respected St Louis Krewes who had gotten together to form SquareOne Productions. Be sure to be on the lookout for more interesting shows from these guys.

Unfortunately, because of various issues, I was unable to attend InterFuse, though I heard it went off really well. I had intended to do a story on it this month, but... well... that's how it goes sometimes.

All in all though, it was a fun little laid-back month. I hope everyone is ready for summer, because from the looks of things, it's going to get pretty interesting.