life as we know it 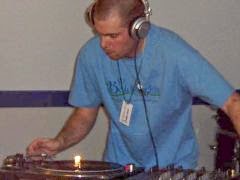 Review by Joe Hensen ~ photos by todd & Joe Hensen ~ The kids were pumped for this party and the night was looking to be filled with good times and good people. The venue was not too hard to find if you could follow the directions from the info line and was at the Knights of Columbus hall, another bingo hall somewhat like Knights of the Pythius only smaller with bad air circulation. The entire room was well lit unlike most venues where darkness reigns, but there were still a few spots where the spotlight setup could not reach.

First up on the decks was the Professor spinning some interesting mixes noticeably the Doors remix of Riders of the Storm. Even though he was the first in the lineup, the Professor put a excellent show. I know I danced a bit myself. Second to whip out some vinyl was local favorite, Frooky. People were steadily streaming through the door and finding themselves mesmerized by some retro remixes of "I Want My MTV." I know I started jumping when I heard that old school sound being pumped through that sound system.

About this time, the venue was starting to get a little packed and everyone was noticing something was just a little wrong. It was hot. Not just Hot, but Really Hot. Because people were not being allowed re-entry, the promoters had decided to allow smoking inside. The smoke combined with body heat and heat of the light setup, turned Knights of Columbus into a virtual sauna. Everyone was getting sweaty and starting to shed clothing.

Feeling refreshed after jumping outside for a breather, cQuence took control of the turn tables. It was time for a little Jungle love. Immediately after cQuence took over the room had a new feel, though the heat and humidity persisted. To make things worse, they ran out of water, but that was soon corrected with a fresh supply. 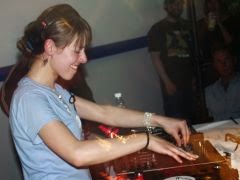 Reid Speed took the decks around midnight, right after cQuence and was ready to move the crowd. As she started her first track the masses started moving as one. There wasn't even room to make your way into the crowd.

Too hot to dance, I found myself wandering to the back of the venue where it was a couple of degrees cooler. Near the door where there was one of the biggest cuddle puddles I had ever seen. I took a few pictures and passed out some water. Most of the kids in this area were suffering from heat exhaustion. They danced so long and hard under the oppressive heat for Professor, Frooky, and cQuence's sets that they had nothing left for Reid Speed.

We stayed for Reid, but just couldn't stay any longer. I gathered my friend I had come with and headed out. I feel a little disappointed not having seen Kid Icarus or Blue but I did here that they tore it up after Reid Speed. The party was good and had an excellent vibe, but we really could have used some of those big industrial size fans to move the air around a little.

View Photos from this Event
zine.v1.stories