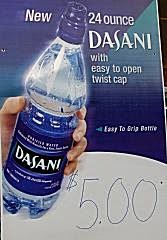 story & photos by todd ~ Is it really fair to charge people for one of the Basic Essentials of Life? Would you charge people to breathe the Air in your house?

While at the Ultra Music Festival, a came across the typical outrage. The Price of Water. As the photograph shows to the right, the price that was being charged for a 24-ounce bottle of Coca Cola's Dasani Bottled Water was $5.

You know, a lot of people try to downplay this issue. I am sure that everyone has heard the arguement come up at one time or another. Many will say that it is irrelevant, but it really is becoming a growing concern at festivals such as this. Add to that, various unfounded accusations by the Department of Justice that Rave promoters are intentionally marking the price of water up to unreasonable amounts and you have to eventually ask, "OK. We've identified this problem, but when is there going to be some sort of action to prevent it from continuing?"

This particular event was at Bayfront Park in Miami, FL. Upon entering the front gate, you were not allowed to bring in any refreshment of your own, even if it was in a sealed, plastic bottle. After a little bit of inquiring and observation, I did note that this park does have the facilities to provide free drinking water for everyone, but the few water fountains that I could access were turned off or outside the availability of the general audience. Adding to this insult, factor in that event organizers go to great lengths to provide numerous perks (including free water) for individuals assisting in organizing the event, as well as the musicians and the production crews. Yet they always seem to forget the people that they rely on the most to make their event happen.

I spoke with one of the vendors briefly about the prices that were being charged and was told that the price had been fixed by the festival organizers as a "fair and reasonable amount". He went on to say that he agreed with that because they "weren't making any money on it." 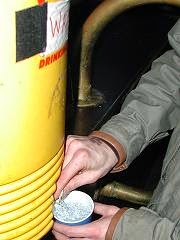 What a stupid and reckless statement to make. At a nearby convenience store the price for a bottle of water was $0.99. I can go to QuickTrip here in Kansas City and buy a bottle of water for $0.79 and the tap water that runs from my home costs me roughly $.00279 per gallon.

In more realistic terms, I recenlty bought a case of bottled water to share with some people that were helping me setup an art show. That case of 24-12 ounce bottles cost me $3.79 at a local wholesale club. That works out to roughly $0.16 per bottle. How is it that Somebody is not making a rather extreme amount of money back on this water?

I don't mind paying $1 or even $2 for a bottle of water when there is definitely nothing else available to me, like tap water from a fountain, but I get really annoyed when I KNOW that somebody, somewhere, is making 500% profit off of me. Some will say that it's because they need to make up what they aren't making at the door. Maybe they should consider a different line of work then? Some will say that if they give it away nobody will drink anything else. Not true. I usually drink lots of water while drinking other things. It keeps me from getting a hang over. And then you will have those that will try to tell you that the tap water isn't safe any more.

The photo just above was taken at The Granada during an event that I attended last year. It was filled with Tap Water and Ice and was Free to everyone. To my knowledge nobody died or was poisoned from drinking it and the promoters didn't lose money by providing it. Those that were there and drank from it were very appreciative. I know that I did.

Any Event organizer that charges an excessive price for water, or allows vendors to do the same should be ashamed of themselves. There really should be some sort of action that can be taken against them. At most of these events, people get over-heated and dehydrated and to either deny, or put such a premium price on one of the Basic Essentials of Life is nothing short of Greed at the Expense Health and Welfare. What's next? A surcharge on your ticket to be able to breathe the Air?
zine.v1.stories