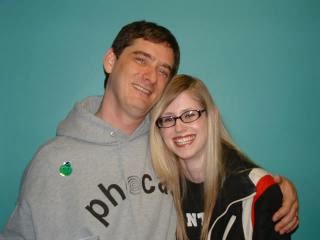 As I sit here writing this, listening to Andrew Boie's "Dead by Dawn", I have had a lot of time to reflect back on the last couple of months and some of the places I've been, such as Miami.

I had only been here a week after Mardi Gras when I was suddenly wisked off to a world where DnB and Techno seemed to be in control. That was actually ok though. I can get plenty of house in Kansas City.

Most of the photographs taken this month were in Miami. This one, of me and my favorite SuperModel Shandi was taken at the Syde-Sho Anniversary Party in Mid March by Kourtney Anderson. This was just the beginning of a series of parties that took place this month that seemed to swell with every event, up to and including Awakening, just last weekend. It's really good to see the masses growing. The energy seems to be rising again. This coming summer could prove to be quite an interesting time.