By jusTodd March 01, 2004
A Peek Inside the Rave that Fought Back and Won ~ story & photos by todd ~ With a front row seat to all of the festivities on Canal Street, Loew's State Palace Theater looks from the outside like a broken down old theater. In any other town it might have already met the wrecking ball, but not in New Orleans. This is the norm and gives this theatre, as well as the city, it's very own personality.

With the exception of Zoolu Sun a couple of years ago, I really hadn't been to a Zoolu party since the whole ridiiculous fiasco with the federal government a few years back and was extremely anxious to see how this annual party was holding on and with this being the 10th, how I could I miss it? I can say that I have never been happier that I decided to go to a party. I wish that everyone reading this could have been there! 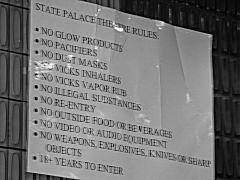 The doors were to open at 9 pm, so we got there an hour or so early. Endymion was just then winding it's way down Canal Street. The sidewalks were lined with thousands as far as the eye could see, everyone shouting, reaching groping for those cherished beads.

We hung around for a bit and took a couple of snapshots, but as soon as the doors opened, we were in. Well, after a brief pat down. There were so many things going on that I had forgotten about the glow necklace that I was wearing and I had to toss that in the trash. (No Glow Products! - First on the List of "nonos"). Apparently, in an effort to keep your friendly government from harassing them, they have found it easier to just ban certain items. At least we could bring our M&Ms in.

Regardless, we got in and it was really no hassle. We didn't need any of the things listed on the NO sign outside the door to dance. After getting our "We're 21" wristband, we enter all of that Marble. The entire entry way seems to be almost carved out, with stairs ascending on both sides to the second level balcony and upper rooms of the Palace. Already the music is banging, though I have no idea who. There's no lineup to be found and nobody really seems to know.

Entering the Main Theater, the sound is LOUD and pretty clear. There's a few bad spots, but it seems that a lot of it is still being assembled. The highs were a little too extreme the closer you got to the towering wall of sound that lined the stage. The light show though... Wow. Really fantastic lights and lazers. 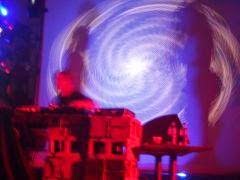 There really weren't that many people there yet, maybe a hundred or so kids scattered throughout a facility that could easily accommodate 3000 or more. They were coming though. The line outside was already around the corner. Oddly enough, upon entry, most of the kidz seem to head for the upper rooms, so I followed and found a good solid House beat, a stark contrast to the fierce music that was pounding below.

To me, the night seemed to go off fairly well. I spoke with several people that night and the consensus seemed to be that it was a good party, but that the attendance was not usual. According to several, "This place is usually packed. Most of the night, you can barely move on the main floor, the upper rooms or the halls." Nobody seemed to really know the reason why though. Though I have no confirmation, I would say there were probably 1000 or so in attendance that first night.

Escaping back in the street sometime around 4 am, there was still random chaos everywhere and we began the long trek back to the car, wandering through the upper streets of the Quarter, all the while pondering the question, "Why did we park clear over on Elysian Fields?". Oh yea... It's all we could find

The next night, sometime around 1 am, after the Bacchus Parade, we were going to head over to Zoolu Sun, a smaller between parties party, but found that I had misread the flyer and that it was actually up on Magazine or something. Instead, we decided just to weave our way back over to the West Bank. 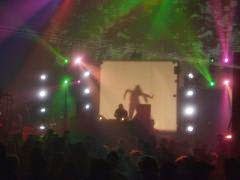 Monday night, after the Orpheus parade (sometime around 1 am) and a stop at the Captain's Quarter, we headed back to the Palace for Zoolu All-Stars. The place was off the hook this night. There was no doubt about it. There were the All-Stars in the main room. We arrived just at the end of Dieselboy and the beginning of one of my favorites, Charles Feelgood and the place was bouncin in every direction and so soon were we. There's just something about Feelgood sometimes that just irresistable It's almost as if he demands that you dance and if you don't, he will find that one track that will move you.

Upstairs was really no different. In foyer balcony foyer, someone was banging out some real smooth house to a good crowd of a hundred or so. It was so crowded there though. People were passing through from upstairs to down, hitting the concession stands and using the facilities. There was barely any room for anyone to dance. Here and there, someone would try to hold the floor in front of the DJ, but it never really last long. We joined a couple of others dancing in a vain attempt to stake out a claim, but it only lasted about 30 minutes and we were soon swallowed by the crowd.

Giving up and moving to the upper room. The upper room was packed. The vibe everywhere was so much thicker than it had been the night before. Later that night, we would still find this upper floor packed and I think there was some rather dark jungle playing. 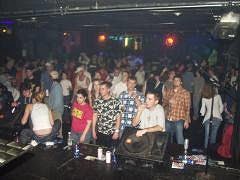 Most of the time, was spent in the main room. I think this was true for everyone that could stay there. Late in to the night, there wasn't a lot of passing between rooms. People seemed to want to stick with what they had. It was making them happy and that was all that really mattered.

In closing, in light of their recent battles with the DOJ and the courts, I really expected to see agents everywhere, lurking in dark shadows just waiting to jump out and catch the unsuspecting glow-stick weilding raver doing even the slightest thing wrong, but it never happened. Security wasn't overbearing, but was organized and handled everything courteously and professionally.

Overall, I would say that they had a really great event. Attendance appeared to have doubled, possibly even tripled from the previous night there. I talked to a lot of people about a lot of different things on those two nights. Everyone I talked to said every party Disco Productions and FreeBass Society has is always good and that's what keeps them coming back over and over again to events at the Palace and other of their events at the House of Blues and Ampersand. Props to both groups for keeping the vibe alive in the South.

Congratulations on a series of successful parties! I have nothing but admiration and respect for what FreeBass & Disco Productions have accomplished and continue to accomplish by ensuring that Zoolu Lives On. See you for Number 11!

Read more the past legal struggles and keep up with all of the latest on the attack on music sub-culture at EM:DEF. Don't foget to contact your representatives and find out their position on the latest legislation that has been introduced as H.R. 834 & S.22 and give them your thoughts. They are elected to Represent YOU!